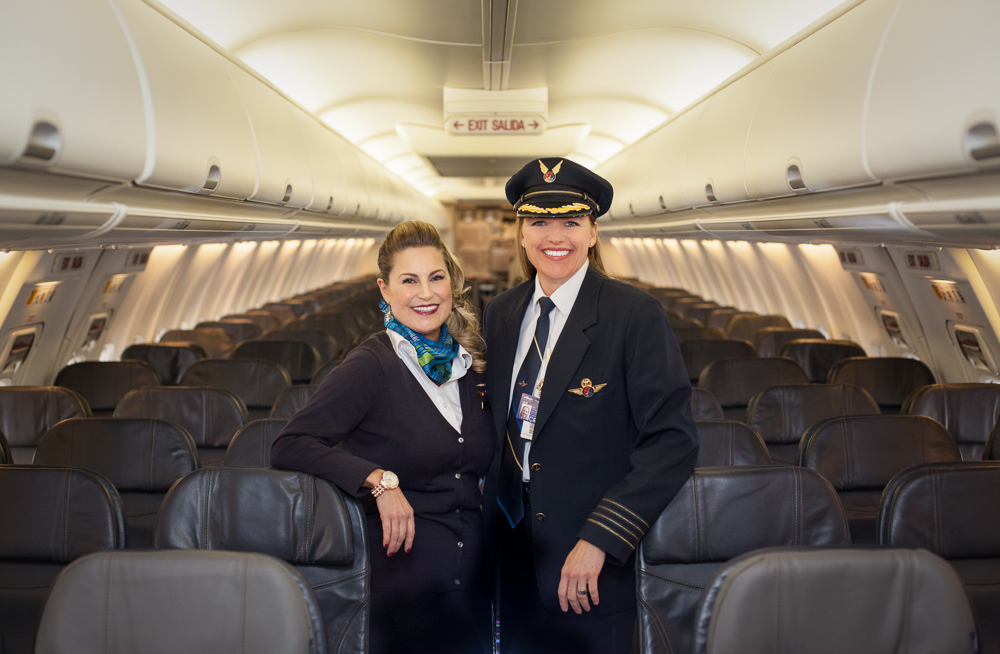 The surgery to transplant a kidney from Alaska Airlines Captain Jodi Harskamp to Flight Attendant Jenny Stansel was performed successfully Monday at Swedish Medical Center in Seattle, and both women are well on their way to recovery.

Following the four-hour surgery, the women’s conditions were listed as satisfactory and they were both able to walk around the hospital together Tuesday morning. Their recovery rooms are next to each other.

They both reported being in great spirits and were enjoying having their families there.

There are the normal things co-workers do to show caring for each other – covering a shift when there’s a family emergency, delivering soup to a colleague with a cold, bringing in treats to celebrate a special occasion.

And then, there is undergoing major surgery to have a kidney removed to be transplanted into a co-worker to save her life. That is what Anchorage-based Capt. Jodi Harskamp is doing for Flight Attendant Jenny Stansel, also of Anchorage.

Harskamp will undergo surgery on March 13 and, with a successful transplant, give Stansel a new lease on life.

Harskamp was one of many employees who had volunteered to be tested to find out if they would be a match for Stansel, who has been fighting for her life for the past 10 months since, as she says, her “kidneys decided to take a long term hiatus.”

The past year, as the 38-year-old Stansel has fought kidney disease, she has undergone seven surgeries, seven visits to the emergency room, five long-term hospital stays and she endures 10 hours of dialysis each night. She also has to travel frequently to Seattle for treatment.

She is living on borrowed time until she receives the transplant, but a successful transplant will allow her to return to a normal life. Kidney donors can also live a perfectly healthy life after a few weeks of recovery from the surgery.

Harskamp was one of the first to be tested – Stansel thinks it’s because her pilot friend kept pestering the kidney center to see if she could be the donor.

Both women are blood type O-positive, and turned out to be a perfect match – and the only match of those who volunteered.

Then Harskamp had to consider the risks of undergoing major surgery – said to be similar to a caesarian section – being out of commission for eight to 12 weeks, living with one kidney and the possibility that her health would not recover enough to pass the stringent health standards required of pilots. After losing a kidney, she will have to limit her sodium and protein intake, eliminate ibuprofen and avoid contact sports that could damage her remaining kidney.

“There goes my rugby career,” she jokes.

She did her research. She spoke to dozens of kidney donors, seven of whom were pilots, and all had been able to return to work after recovering from surgery.

Ultimately, she decided the sacrifice was worth the risk.

“Jenny is a fabulous person. I’d like to see her stick around for a long time,” she said.

Harskamp, who is 41, and has two children of her own, ages 4 and 6, says she is paying forward the kindness that the entire Anchorage base showed to her when her family’s Anchorage home burned to the ground four years ago.

Every night for weeks after the fire, a flight attendant would show up with a meal on the doorstep of the home where Harskamp and her family were staying. Even though they didn’t know each other at the time, Stansel was the first to appear with a tray of lasagna and some wine.

Since then, the pair have worked together many times and had adventures on a few layovers. Now, their friendship cemented by the best gift that could ever be given, their families spent Thanksgiving together.

Stansel is in awe, not only of Harskamp’s gift, but of many other employees, friends and even strangers who were prepared to make the same sacrifice.

Stansel’s coordinator at Swedish Hospital’s Organ Transplant Center in Seattle told her the hospital has never seen so many “living donor” applications. Stansel said that includes flight attendants, pilots, friends of friends and people she has never even met.

“Not only were most of you willing to give your kidney to me but you were willing to give to another recipient in an exchange that would allow me to receive a kidney. That is history in the making!” she said in a thank you letter to her co-workers. “That is a testament to our courage, bravery, faith and sincere love that we all have for one another as a family. The incredible power and force behind our work group is unparalleled.”

Of course, Stansel saves her most effusive praise for Harskamp, who has undergone a trial of her own since it was discovered the two women are a match. Harskamp flies on her days off from Anchorage to the Seattle hospital to be tested, poked and prodded and attend donor meetings to get all of her questions answered.

“It is hard for me to put into words the gratitude I have for the sacrifice she and her family are making. Throughout, Jodi has maintained a positive attitude and a genuine attentiveness toward my well-being, all while caring for her own family. She is my hero!” Stansel said.

Both women have also kept their well-known senses of humor. Stansel even named her future kidney – it was “Kevin” but she’s since renamed it “Kevlina” since it’s a “girl kidney.”

Harskamp said she is sharing their story in the hope of inspiring other people to consider organ donation. There are 100,000 people in the U.S. on a waiting list for a kidney, she said.

“If this inspires just one person to consider it, I would be so happy,” she said.