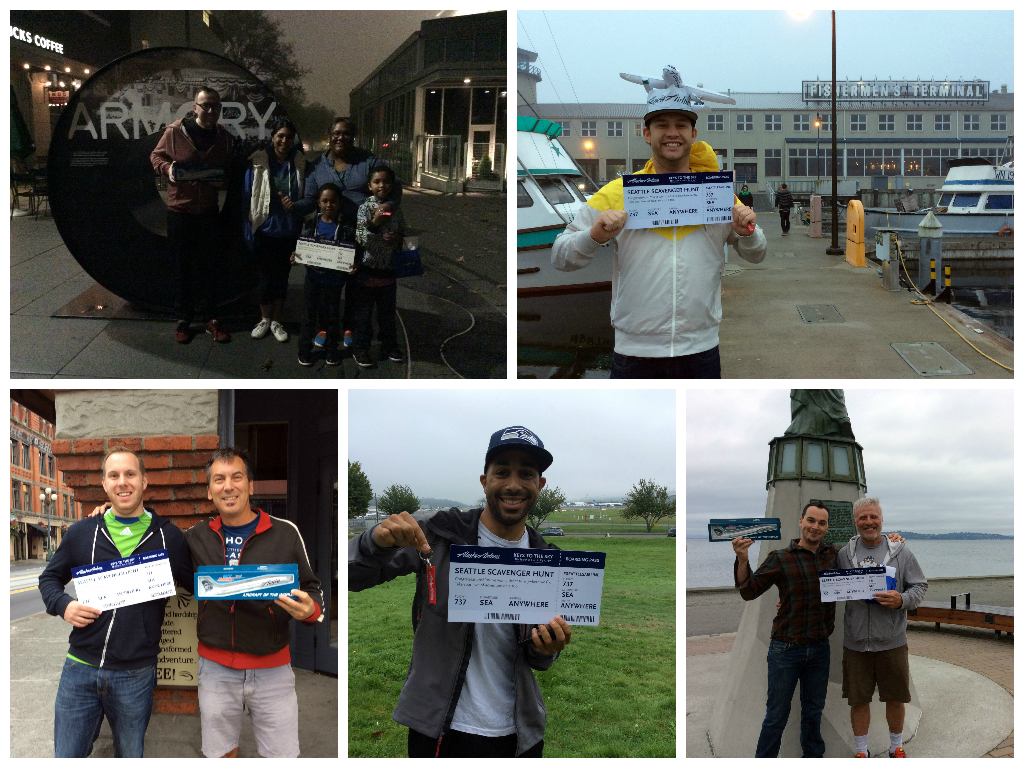 This week Alaska Airlines announced the order of 10 new 737-900ER aircraft to be added to our all-Boeing fleet. To celebrate, we chose five secret locations around Seattle and carefully crafted clues designed to inspire Seattle-area explorers to discover new corners of the city.

Our five grand-prize winners each received two roundtrip tickets anywhere Alaska flies from Seattle and the chance to test-drive our 737 flight simulator. Our five runners-up and their guest will be invited to join us on the delivery flight of a brand-new 737 next year.

Thanks to everyone who participated in the “Keys to the Sky” scavenger hunt, and congratulations to our winners!

Clue #1: No longer prairie, “circus” or mall. From this hub of culture, all points are equidistant.

Our first winners found us at “the center of the center” – the Seattle Center Armory. Once a prairie, then the world’s first vertical mall and a food court known as the “the Food Circus” during the 1962 Seattle World’s Fair, this spot piqued our interest both for its rich history and for the culture and flavors you can discover there.

Congratulations to Tara of Mountlake Terrace and Alan of Seattle!

Clue #2: Found on the side of our plane, these Kings have been docking here for 100 years.

Next, our explorers made their way to Fishermen’s Terminal, which celebrates its centennial this year. From the King Salmon featured on the side of our beloved Salmon-Thirty-Salmon plane to the more than 25 million pounds of fresh Alaska seafood we shipped to the Lower 48 last year, our connection to the seafood industry runs as deep as Salmon Bay.

Congratulations to Steven and Brian, both of Seattle!

Our third clue leads us to the smallest national park in Seattle – Klondike Gold Rush National Historical Park, a tiny offshoot of the Skagway, Alaska park. Our “Golden Nugget service” of the 1960s paid tribute to the gold rush of the 1890s, and this clue is throwing it back to this quirky piece of Alaska Airlines’ colorful history.

Congratulations to Daniel and Paul, both of Seattle!

Ruby Chow Park is one of the city’s best spots for plane-spotting, and Ruby Chow herself was a woman worth noting. At Alaska, we celebrate trailblazers, pioneers and free spirits, and Ruby Chow was all of the above and more. Restaurateur, activist, the first Asian American member of the King County Council and one-time employer of Bruce Lee, this is a woman worth discovering.

Congratulations to Jordan and Rebecca, both of Seattle!

Clue #5: Greener Skies above us. This final clue made possible by the Boy Scouts of America.

Our final clue led us to the Alki Beach Statue of Liberty, where some of Seattle’s earliest explorers first came ashore at “New York-Alki.” This pint-sized Lady Liberty donated to the city in 1952 by the Boy Scouts of America make us yearn for cross-country trips to the city that never sleeps. Alki also lies beneath our flight path in the Greener Skies Over Seattle program, a collaborative project with the FAA, the Port of Seattle and Boeing to fly quieter approaches using less fuel.

Congratulations to Ken and Michael, both of Seattle!

Keys to the Sky survey: