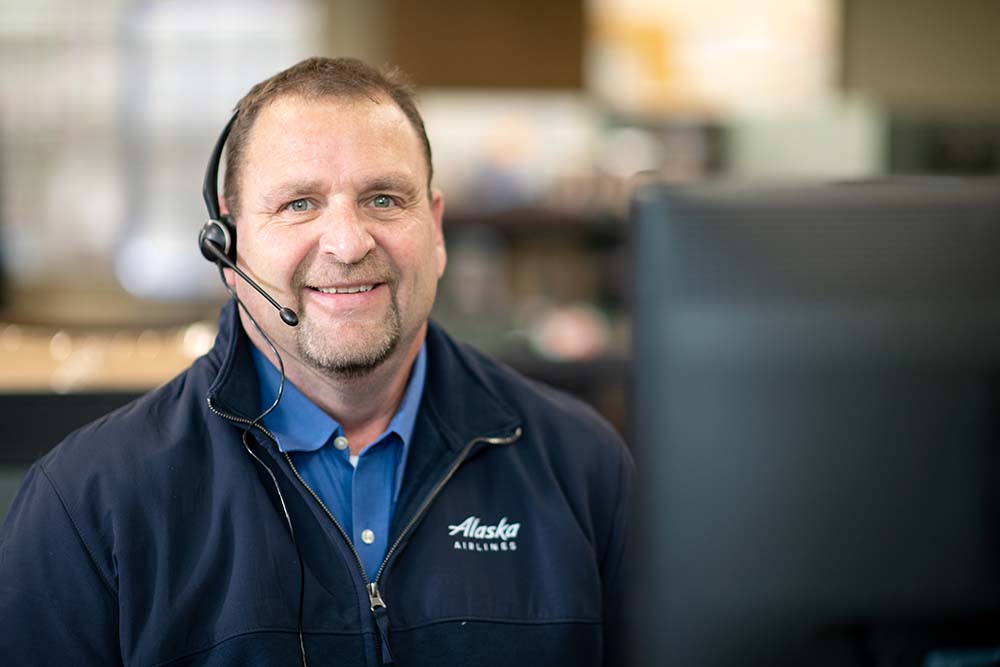 On a shelf in Kevin Tobey’s home office near Seattle is a baseball signed by Seattle Mariners great Edgar Martinez. Martinez signed the ball after Tobey threw it for a ceremonial first pitch during Edgar Martinez Appreciation Weekend in Seattle in 2019. Martinez was being honored for his induction into the National Baseball Hall of Fame, and Alaska Airlines, the Official Airline of the Seattle Mariners, asked Tobey to make the pitch as a 2019 inductee to the airline’s version of the Hall of Fame—its Legends of Customer Service. Today, Tobey’s Legend plaque is next to the ball on his shelf.

“I jumped at the chance to throw the pitch,” says Tobey, a 25-year employee of Alaska Air Group, who used to play softball recreationally. “It wasn’t a great toss, but I got it to the plate!”

Tobey says he often looks at the ball and the plaque and reflects on how lucky he feels to work for Alaska and to have won the award: “I was humbled to be chosen. There are so many amazing Alaska employees. I’m just a guy who sits down and tries to do his job well every day.”

Originally from Coos Bay, Oregon, Tobey began working for Horizon Air in Seattle in 1994. He worked as a Ramp Service Agent until 2012, when, after a knee injury, he had a chance to work in Reservations at Alaska. He expected to return to his old job, which he liked, but he found the role of a Reservations Sales Agent fit with his love for talking with people and offering assistance.

I found a home,” Tobey says. “I had the gift of gab and the heart to help.”

Tobey is admired for his caring approach with callers and for the ways he helps friends and strangers in a pinch—ranging from taking on shifts during holidays to stepping up for extra projects, to collecting goods for disaster-relief efforts. Tobey says it just gives him a good feeling to assist people when he can.

We all need help sometimes,” he says. “Give me a call. I’ll take care of you.”

What do you like most about your job?
I work with amazing people at an amazing airline that supports my decisions and allows me to do what’s right. Also, I get to be at the forefront of a person’s travel experience. I’m the first line of contact.

How do you provide good service?
I take every call as though it’s my first call. I still truly want to help the person on the other end asking me something I’ve been asked a thousand times. I know that for them, calling in, it’s the first time.

What is most important to you in life?
My wealth is in my kids and what they do. My son is a police officer. One daughter is in the National Guard. One daughter is a teacher. I have two granddaughters and a grandson, and I’m expecting another grandchild through adoption.

What do you always take on a flight?
A good book and a good attitude. I always appreciate that my job allows me to travel. For me, growing up, it was a really special thing to fly. I still don’t take it for granted.

“I walk away with a smile after speaking with Kevin. He exudes such positive energy, and it makes me want to talk with him more. He also does an excellent job advocating for guests.” -Jeanne D., Director Reservations, Seattle, Boise and Phoenix

“Kevin exemplifies Alaska Airlines values to a T. Our guests love him; he gets a lot of kudos; and he’s highly thought of by the leadership team and his co-workers.” -Shari T., Reservations Manager, Seattle

“Kevin is a very passionate and dedicated employee who truly cares about Alaska’s guests and others. He is always thinking of others and will drop everything to help.” -Mary A., Managing Director, lnflight Strategy and Support, Seattle

“Kevin makes his job fun. And for those who have an opportunity to be around him when he’s in the office, it makes it fun for the whole group.” -Ayana J., Supervisor, Reservations, Seattle