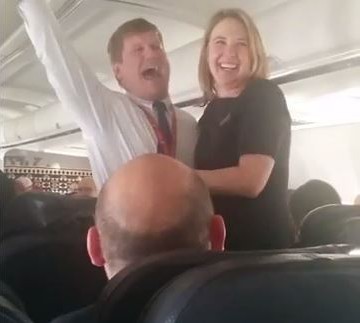 Alaska Airlines flight attendant Brandy Hollenbeck began her March 18 flight from Seattle to Juneau, Alaska like any other.

As she worked the flight, the first leg of Alaska’s ‘milk run’ through Southeast Alaska, she had no idea that behind the scenes her boyfriend and her fellow flight attendants were scheming to give her a surprise inflight proposal.

“We tried to keep her busy in the back of the plane during boarding so she wouldn’t see (her boyfriend) Eric board,” said RieAnn Fullwood, another flight attendant and Brandy’s close friend.

Ravn Alaska pilot Eric Greener had secretly called all the flight attendants at midnight the night before to let them in on his plans. As a pilot, he was allowed to sit up in the flight deck jump seat, where he waited, hidden, for the right time to make his announcement.

Midway through the flight, Greener began telling their story over the PA, starting from when his mother first came home from an Alaska Airlines flight talking about the flight attendant she’d just met, who she believed was the girl for her son. Hollenbeck was still unaware of what her boyfriend was up to, focusing instead on serving coffee to all of her customers.

“At one point I thought, ‘Someone up there is telling my love story!’ But I just kept serving coffee,” she said.

When Greener finished his heartwarming story and asked Hollenbeck to marry him, the plane full of passengers burst into applause, some of them becoming teary eyed.

“I’m a Gold (frequent flyer),” said one customer, “and I’ve never seen anything like that!”

The couple hasn’t set a wedding date, but Hollenbeck says they’d like to have a summer wedding.