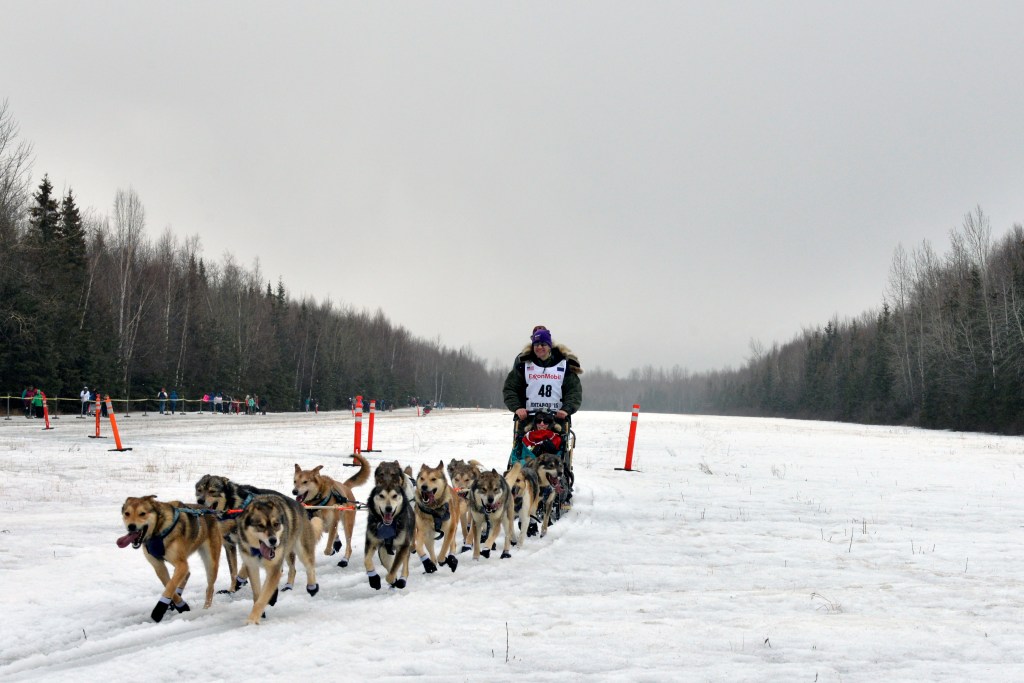 Two days before the ceremonial start of the 2015 Iditarod, 78 mushers gathered for a welcome in a hotel conference room in Anchorage, Alaska.

In among the sweatshirt, bivy sack and other pre-race swag given to the mushers is a small but very important notebook: the vet book. It is in this notebook that a team of volunteer veterinarians stationed along the trail’s 18 checkpoints will document careful notes about every single dog that passes through every checkpoint.

The Iditarod is a race, so the big prize is a first-place finish. But according to most mushers and volunteers, there’s a trophy that’s even more special: the Leonhard Seppala Humanitarian Award, presented by Alaska Airlines.

“I believe that other than winning the Iditarod, this award means more to the mushers than any other award,” says Marilyn Romano, Alaska Airlines’ regional vice president in the state of Alaska. “I’ve only ever seen two standing ovations at the Iditarod: one is for winning the race and one is for the Leonhard Seppala award.”

This year marks the 37th year Alaska Airlines has supported the Iditarod. In addition to presenting the Seppala Humanitarian Award, Alaska helps provide dog-care supplies to veterinarians and air transportation for veterinarians, race officials and other volunteers.

Each year, the team of trail veterinarians chooses from the top 20 finishers the musher who has demonstrated outstanding care of his or her team, while remaining competitive. The Leonhard Seppala award is named after one of Alaska’s most-celebrated mushers, whose 1925 sled-dog team traveled the longest distance to transport diphtheria serum to Nome. This year, the award went to Nicholas Petit.

“I mean, this is a dog race,” says second-year veteran musher Bryan Bearrs, an elementary school literacy coach from Anchorage who ran his first race in 2006. “It’s all about the dogs.”

Bearrs returned this year for his second go on the trail on behalf of friend Karin Hendrickson, a musher who was hit and injured by an out-of-control SUV while training her dogs in November. To continue the dog team’s training while Hendrickson recovers, Bearrs stepped in to take her place and lead the team. Most mushers complete their journey to Nome in 9 to 15 days. This year, treacherous weather conditions cut his run short in Koyuk.

Read about Bearrs’ journey: find photos and other updates on the Karin’s Run – North to Nome 2015 Facebook page.

“I’m a teacher, so seeing these dogs so excited about learning and racing, seeing them jumping and barking at the starting line – that joy is contagious,” he says.

The Iditarod is a grueling, 1,049-mile trail, running from Willow (just outside of Anchorage) to Nome, on the Bering Sea coast. Mushers drive 16-dog teams through extreme weather and trail conditions in tribute to the 1925 dog sled run from Anchorage to Nome that brought medicine to head off a devastating diphtheria outbreak.

Each year, downtown Anchorage hosts an 11-mile ceremonial start the day before the official race restart in Willow. This year, for the second time in the race’s 43-year history, poor trail conditions have pushed the official start north to Fairbanks.

Second-year vet volunteer Dr. Dawn Sessions says she first became interested in the Iditarod when she read about the race in an Alaska Airlines magazine about five years ago. She’d heard rumors that sled dogs aren’t well-cared-for, and being an animal-lover, decided to come see for herself.

When the Boise-based veterinarian arrived in Anchorage for the first time in 2014, she was blown away by the outstanding care she saw – and now she’s determined to help spread the word.

“These dogs are truly part of the (musher’s) family, and they’re doing what they love to do,” says Sessions. “They want to run.”

Communication between dog team and musher is constant throughout a race.

Bearrs spoke to his team throughout Saturday’s 11-mile ceremonial start, giving commands, course corrections and encouragement to each dog. “Good, good pups!” he cheered, as his team stayed focused while a young girl jogged alongside the dogs through the woods near Alaska Pacific University.

Romano says one of her favorite parts of the race is watching mushers come across the finish line in Nome and run straight to their dogs to thank and embrace them.

“It’s the greatest sporting event,” added U.S. Sen. Lisa Murkowski, Alaska, before Saturday’s ceremonial start. “But it’s also the most touching demonstration of the bond between man and animal that you will ever see.”

2. The dogs go through thousands of booties on the trail, worn not for warmth but to protect their feet as they run over 1,000 miles of changing terrain. Bearrs estimates he’s shipped at least 4,000 booties out to checkpoints.

3. Veterinary care is provided by a team of more than 40 licensed volunteer veterinarians, who will perform more than 10,000 routine checkpoint examinations over the course of the race.

This year, for the second year in the race’s 43-year history, weather conditions forced the Iditarod trail committee to relocate the official race start to Fairbanks.

Thousands of people watched from the banks of the frozen Chena River Monday, cheering for their favorite mushers in subzero temperatures. 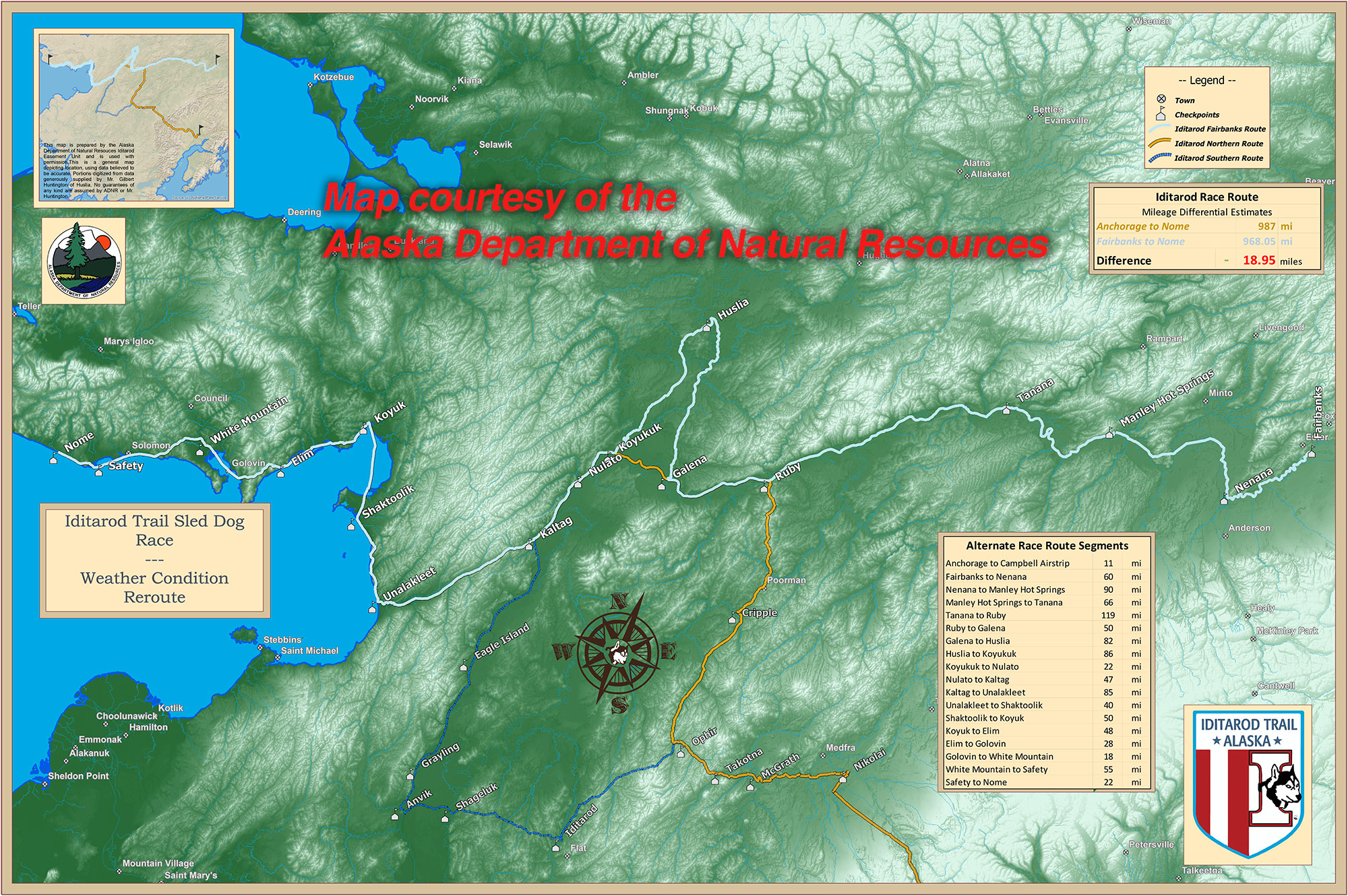