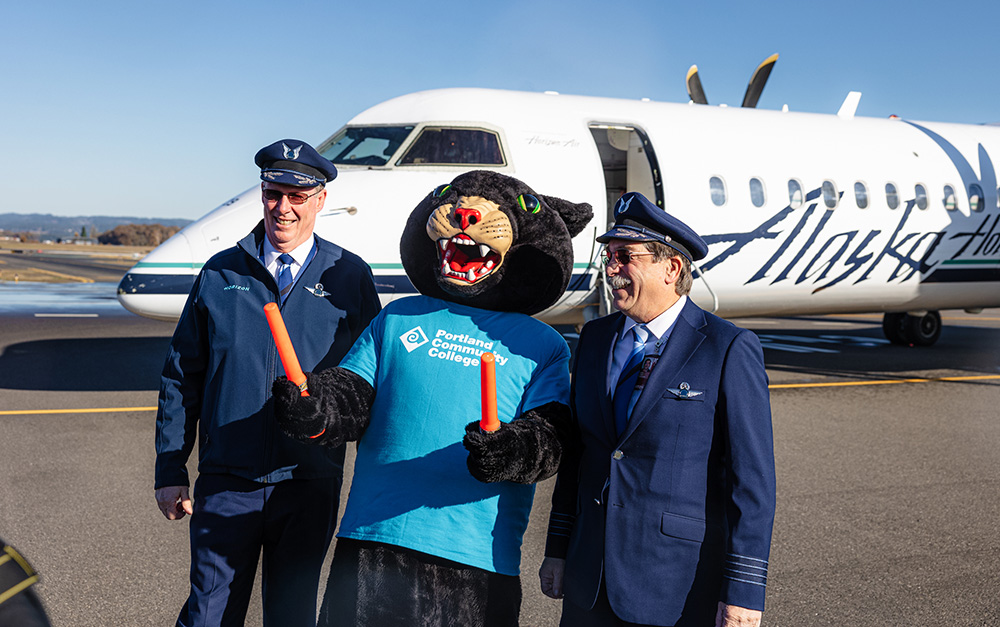 Horizon Air pilots and the Portland Community College mascot in front of the donated Q400 aircraft. Horizon Air donated the aircraft to help continue building the pipeline for aircraft technicians.

As a high school student, Horizon aircraft technician Kayler was a member of his school’s robotics team. Though Kayler had never set foot on an airplane, let alone thought about a career in aviation, his coaches who were both military aircraft technicians, planted an idea. If Kayler liked the technical problem solving and the hands-on aspect of building robots, then working with airplanes might interest him.

So that’s what Kayler set out to do. After graduating high school and attending the Oregon Institute of Technology, he moved to Portland and enrolled at Portland Community College (PCC). During his time at PCC, Kayler landed a summer internship with Horizon Air.

“I grew familiar with the company and aviation in general. During the last six months of my internship, I had the opportunity to work on the floor under the guidance of several experienced technicians while finishing up at PCC,” Kayler said. “It was great to get such broad exposure and develop my skills before I even left school.”

Kayler was hired as an aircraft technician for Horizon in 2021.

A big donation to meet the growing demand for maintenance technicians

Students like Kayler are in growing demand. In the next two decades, the aviation industry will face a shortage of skilled certified workers, according to an industry report developed by Boeing. Throughout the next 20 years, there will be a projected global demand for more than 600,000 aircraft technicians.

To help us build the next generation of aircraft maintenance technicians, Horizon donated a retired Q400 – N429QX- to the Portland Community College Foundation, a non-profit that mobilizes private support for student scholarships and educational programs at PCC.

The donated Q400 will give students in the school’s Aviation Maintenance Technology (AMT) and Aviation Science (AVS) programs the opportunity to gain hands-on experience working on a commercial aircraft. At many AMT schools, students work on aircraft that are much smaller than what’s used at mainline and regional airlines, so the donated Q400 is a game changer and will better prepare technicians for joining airlines like Horizon and Alaska.

In addition to the Q400, Horizon donated 50 iPads to ensure the school has the latest procedures and manuals to work the aircraft to commercial standards. Many people across Horizon, including numerous technicians, worked for months to return this aircraft to service. It flew its final flight to Hillsboro Airport, where it will become a critical component to students’ learning.

This Q400 will give students the opportunity to get their hands on a full-size airplane from a real airline and the skills and knowledge they gain will carry them for their entire career,” Kayler said. “This is a huge asset to the program and I’m really grateful to everyone involved in making this happen.”