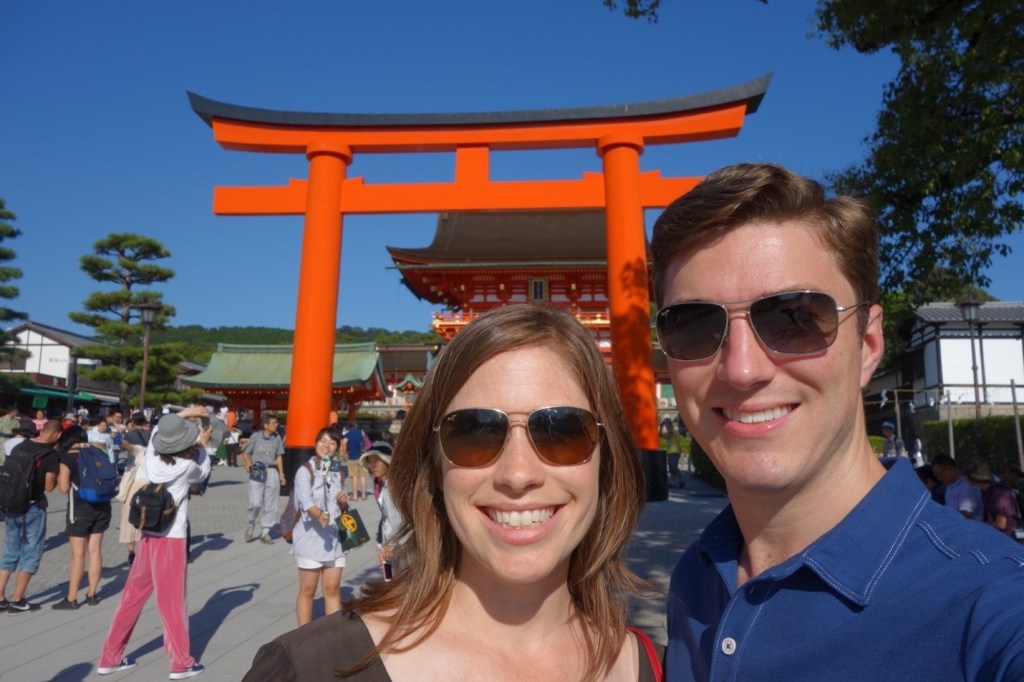 My wife and I have spent years traveling throughout Asia, but Japan is by far one of our favorite destinations. The excellent hospitality, amazing food, and peaceful parks and temples make it appealing in any season. And as one of the closest destinations from the West Coast, it’s easy to stop and explore the Japanese archipelago or connect onward to the rest of Central and Southeast Asia.

Last year, we visited Tokyo to witness the famous cherry blossom (or “sakura”) festival. Thousands of people enjoy picnics under the trees. Our most recent trip in September included stops in Kyoto, home to over a thousand Buddhist temples and Shinto shrines, and the amazing restaurant scene in nearby Osaka. We planned to fly home from Osaka with a short stop in Hawaii.

Japan Airlines, or JAL, is one of the newest international partners of Alaska Airlines Mileage Plan. This means you can earn or redeem through Mileage Plan when you fly on JAL, and the miles you earn on JAL flights count toward MVP elite status with Alaska Airlines. I’ve enjoyed several trips with JAL in recent years, so I decided to write about what it’s like to travel in JAL’s international business class if you’re thinking of visiting Japan in the near future.

All award prices are one-way. Additional taxes, airline fees, and a $12.50 partner booking fee apply to each ticket.

As you can see, travel to Southeast Asia from North America requires an additional 5,000 miles in each direction. Remember that all Mileage Plan award tickets also include a free stopover in each direction’s gateway city, so you can potentially visit more than one city on a single ticket. If you’ve already booked a separate ticket to Asia, you can also use Mileage Plan to book award travel within the region.

JAL operates flights from Tokyo-Narita (NRT) and Tokyo-Haneda (HND) to several U.S. cities including San Francisco (SFO), Los Angeles (LAX), San Diego (SAN), Dallas (DFW), Chicago (ORD), Boston (BOS), New York (JFK), and Vancouver(YVR). I prefer Haneda for its proximity to Tokyo, and it’s easy to travel around the country on a connection flight or one of the many high-speed trains. However, Narita may have more flights available.

Keep in mind that this review covers a recent flight from Osaka to Honolulu, which requires the same number of miles as flights between the Continental U.S. and Japan.

Airport Arrival and a Visit to the JAL Sakura Lounge

When my wife and I arrived at Osaka-Kansai International Airport to check in, I noticed a long queue for baggage check and boarding passes. Automated kiosks are available even to international passengers and can help you skip the line if you will carry on your luggage. This can save a ton of time at both ends of your journey and is a common habit of frequent travelers.

Don’t be intimidated by all the Japanese signs! There’s almost always an option to switch to English on a kiosk. We scanned our passports and were quickly on our way through security. Our Boeing 777-200 had already arrived at the gate directly across from JAL’s Sakura Lounge for Business Class passengers. With a couple hours to kill, we went inside to enjoy a few drinks and check up on the news. 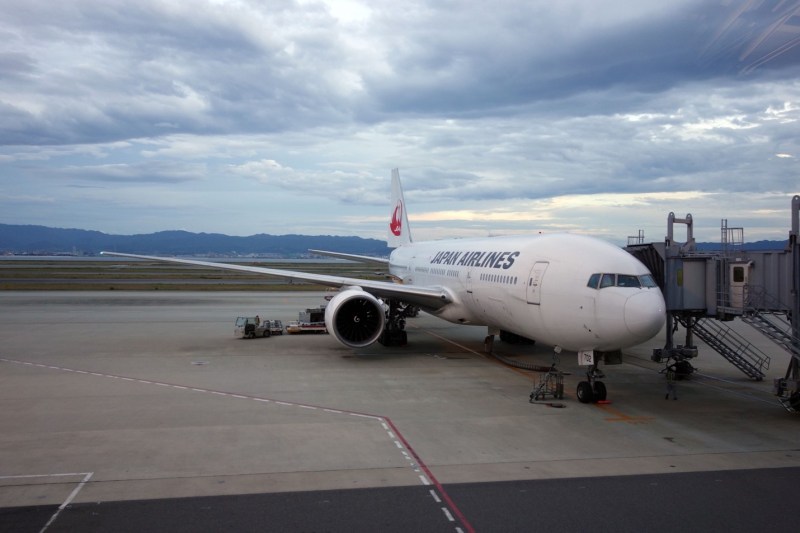 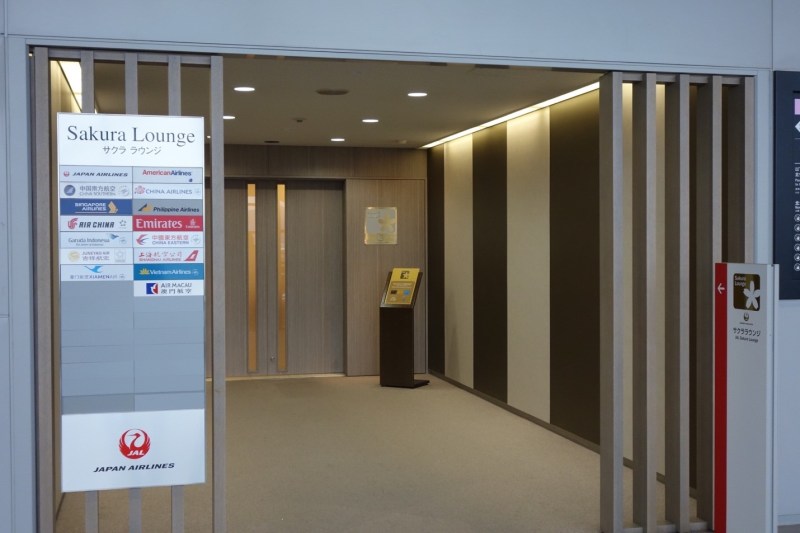 Agents at the lounge inspected our boarding passes and quickly ushered us into the main dining room. While the Sakura Lounge in Osaka is smaller than some other locations, it still features a hot buffet, separate dining and reading areas, and an office area with desks and printers. Lockers are available if you want to secure your luggage. 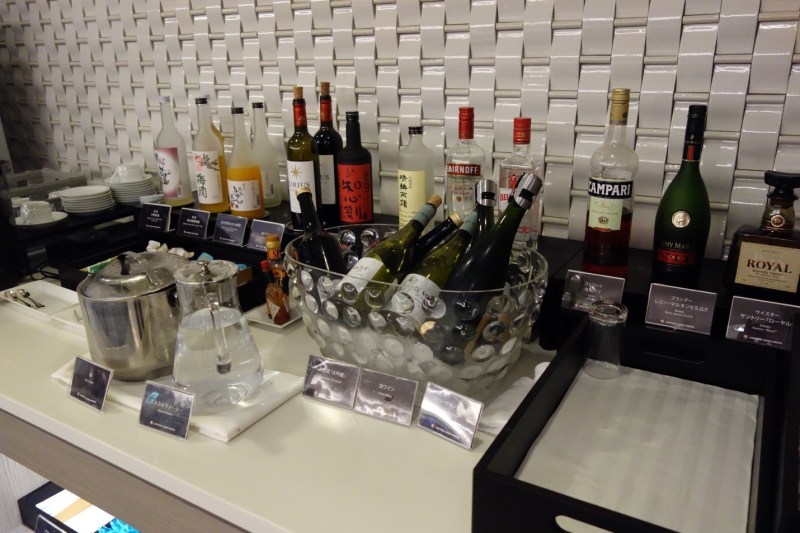 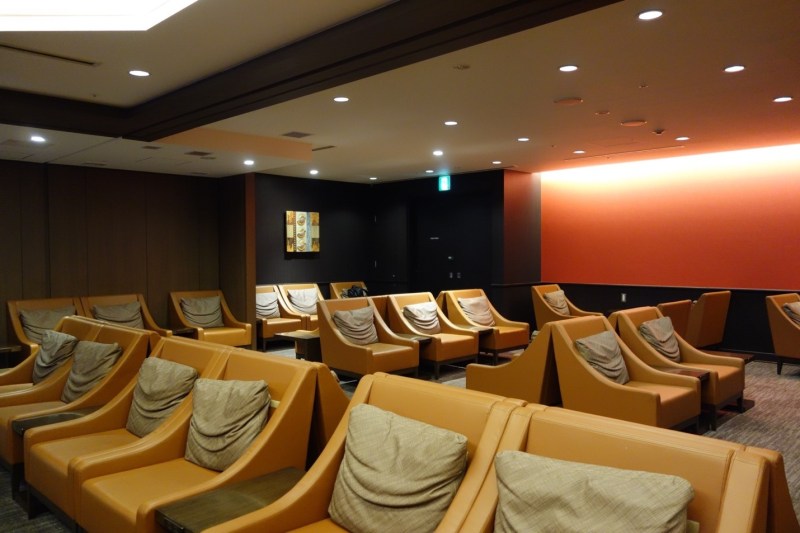 Of course, I knew immediately that I wanted to use the beer machine. Airport lounges throughout Japan are known for these automated dispensers that will tip and fill a glass to provide the perfect amount of foam. It’s trivial but still amuses me every time I visit. 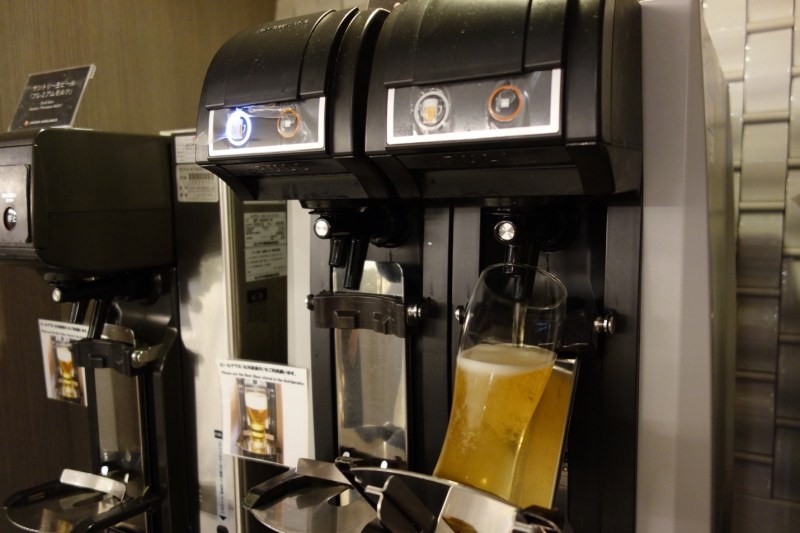 As you’re more likely to pass through one of the larger Sakura Lounges in Tokyo-Narita or Tokyo-Haneda, I can share my experiences there from past trips. I had a chance to visit the First Class Lounges at both airports.

Many of the same amenities are available. In Narita, there is also a sake bar and a chef on hand to prepare fresh sushi. But the Haneda lounge is definitely my favorite. It has a separate “RED Suite” in the back of the First Class Lounge that is decorated with airline memorabilia, including wall coverings made from aeronautical charts used by pilots around the world. 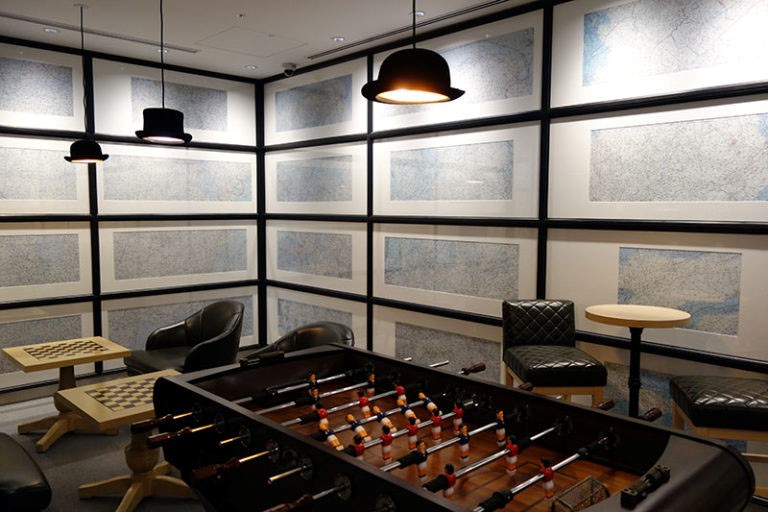 Getting Settled in Our Full Flat ‘Sky Suite’

Our flight to Honolulu was operated with a Boeing 777-200 that featured Japan Airline’s newest business class configuration including the JAL Sky Suite III. This is a reverse herringbone design popular on other Alaska Airlines global partners such as Cathay Pacific and American Airlines because it provides a good compromise of space, privacy, and comfort. Seats are arranged in a 1-2-1 configuration that gives all passengers direct access to the aisle.

My wife and I settled into two center seats in row 9. A blanket, pillow, slippers, noise-cancelling headset, and amenity kit were waiting for each of us. 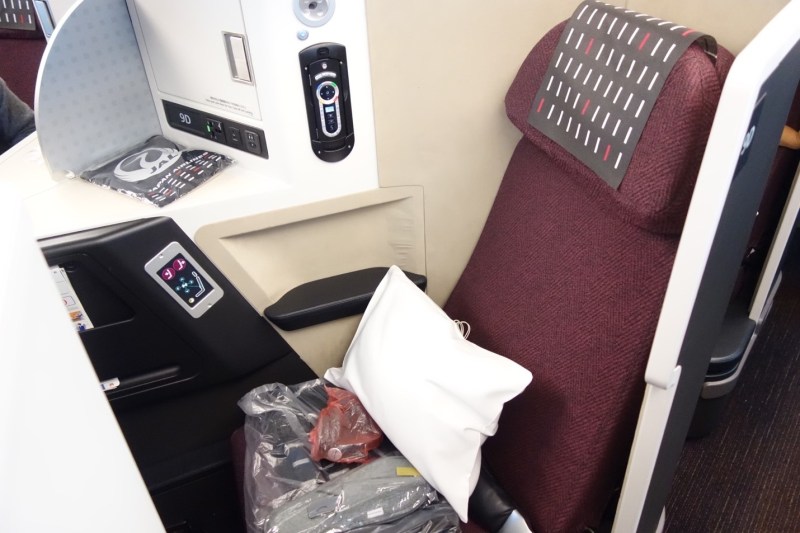 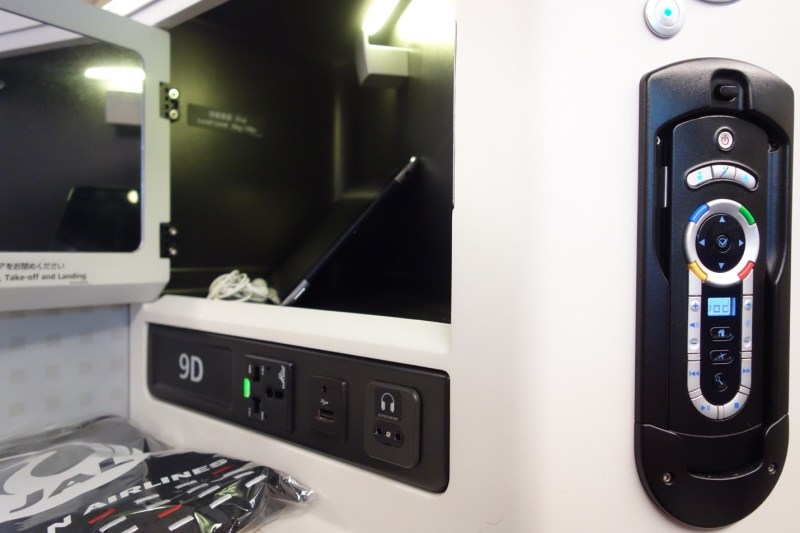 A small cubby near the headrest provided a place to store my iPad and other personal items during the flight so I wouldn’t need to reach up into the overhead bin. After stashing my luggage, I stretched out my legs to reach the ottoman in front of me and celebrated with a glass of Champagne. 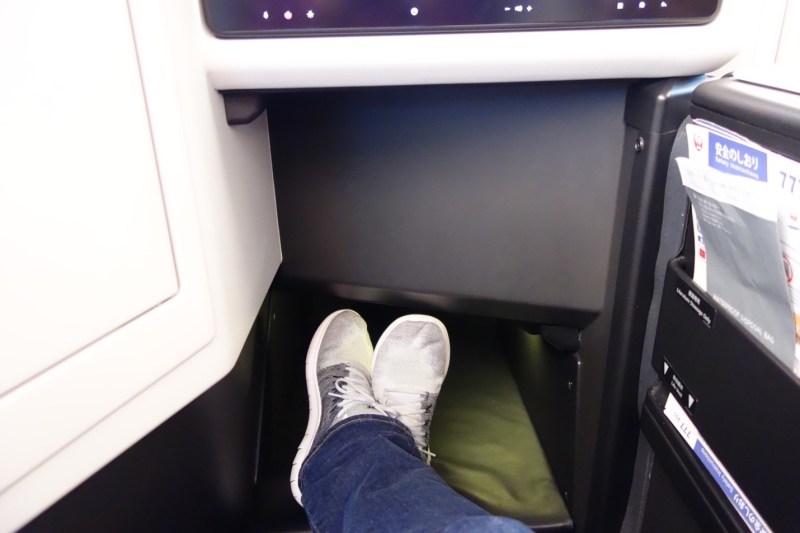 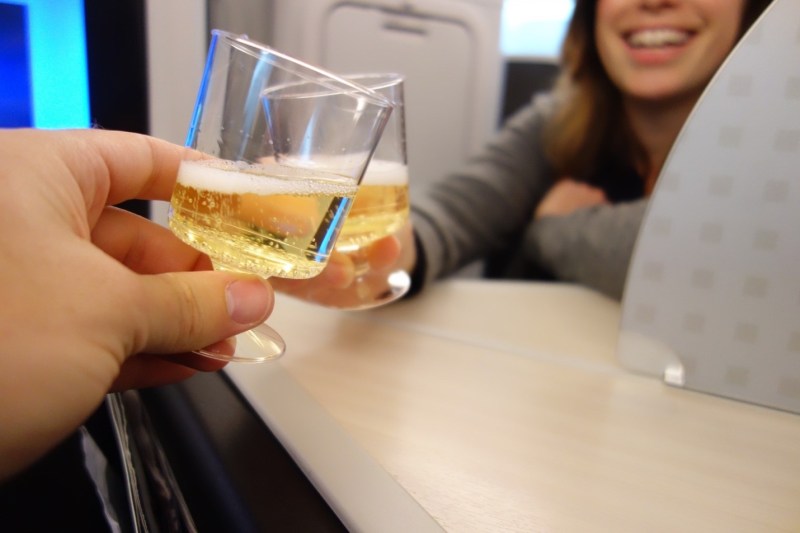 It was already dark by this time, and we didn’t have window seats. However, visitors to Japan should definitely look outside when the plane pushes back from the gate. It’s common practice for the ground crew to stand in a line and wave to the departing passengers. The excellent hospitality in Japan (known as “omotenashi”) shines through everywhere you go.

The crew had another surprise for us once we were in the air. They somehow noticed it was my wife’s birthday. One of the flight attendants stopped by with a small gift bag, including a personal note, a model of our plane, and a few Jean-Paul Hévin chocolates. Small touches like this always make the travel experience more memorable! 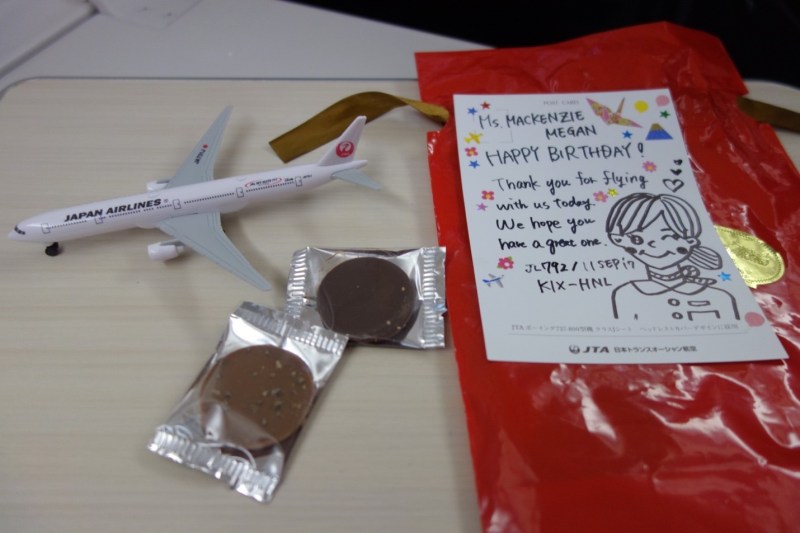 During the beverage service, flight attendants also passed out menus. JAL’s BEDD program emphasizes its relationships with over a dozen chefs to design menus in every cabin class, with a special “BEDD for Resort” menu designed by Chikara Yamada on its flights to Honolulu. Mr. Mr.  Yamada first trained under Ferran Adrià of the famous “El Bulli” before opening his eponymous restaurant in Tokyo. 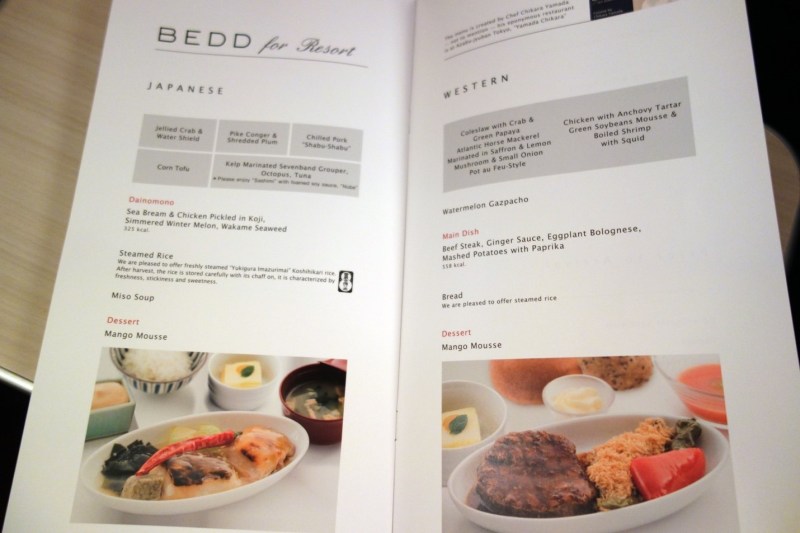 Because this was a relatively short flight, the menu only had two selections. Passengers could choose between either a Japanese meal with sea bream and chicken or a Western meal with beef steak and a stuffed red bell pepper. Both meals included a large sampler of small appetizers and concluded with a mango mousse.

The mango mousse was light and delicious. But my wife chose to finished things off with a cheese plate and more wine. I opted for a glass of Scotch as I settled back to watch a movie. JAL has dozens of classic films and new releases in multiple languages, and I’ve never run out of things to watch on the JAL MAGIC entertainment system.

Can You Really Sleep Well on a Plane?

For a long time, I almost never slept on planes. It’s difficult for me to fall asleep in general, and the noise and activity in the cabin doesn’t help. However, a full-flat bed with ample space in the foot well can make a big difference. I chose this flight in part because I knew it would feature a good seat that has impressed me during my trips with other carriers. I took this photo after we landed to give you a sense of how much space to expect on board.

Even though I’m a little over six feet tall, I slept perfectly fine on my back, with room to move around, for about half of our eight-hour flight. The cabin was still dark when I awoke, but a flight attendant quickly noticed me and stopped by to offer a warm towel and a cup of coffee. I had another cup and some pastry while waiting for the formal breakfast service to begin.

But soon that was over, and we began descending to Honolulu. The cabin began to buzz with anticipation of sunny beaches and tropical drinks.

Planning Your Next Trip on JAL

In summary, my wife and I had another great experience traveling with JAL. Japan has become one of our new favorite destinations, and we’ll continue to look for opportunities to fly with them when award space is available. One of the best parts of international travel is being able to experience the culture a little longer by flying with a local carrier. JAL has certainly always made an extra effort to make us feel welcome with their warm spirit of omotenashi.

Other stories by Scott Mackenzie: