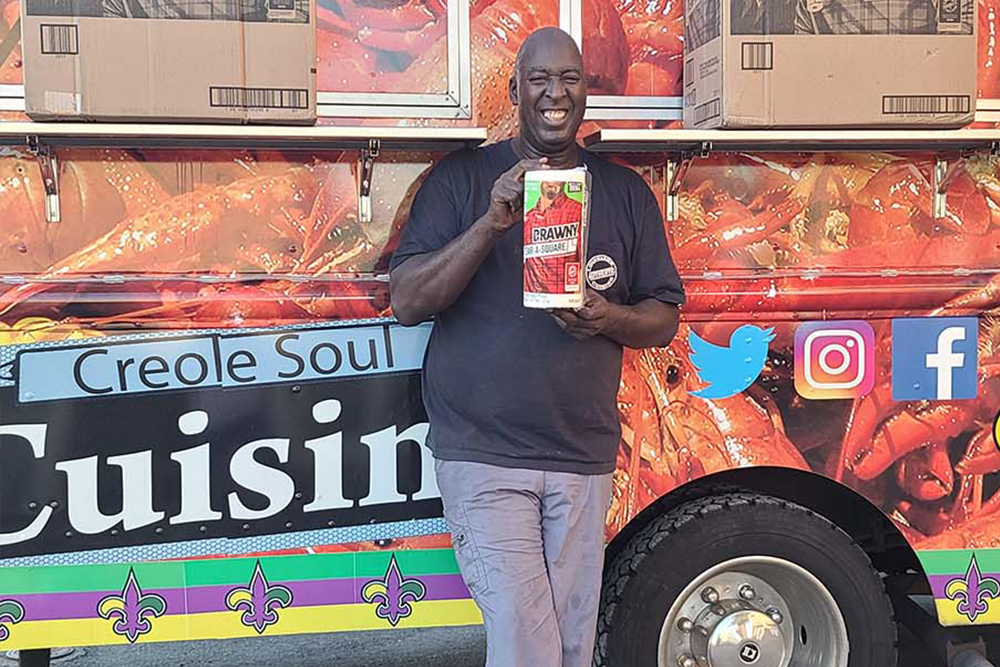 When Hampton Isom joined Alaska Airlines in 2015, he had no idea what would become of it and the joy he’d bring to people in the skies and his community.

Nominated by his peers, Isom, who is a flight attendant based in Seattle and also runs his own food truck business, recently won an initiative from the Brawny® paper towel brand for going out of his way to support his community.

The Brawny® Giants Initiative was created to recognize and support people who are going out of their way across the country to help those who’ve been affected by the COVID-19 pandemic.

After roaming the globe, first as a professional basketball player and later a flight attendant for Alaska Airlines, Isom aka “The Boss,” had big plans to bring his love of Cajun Cuisine to the Pacific Northwest while also giving back to people in need. Through “sweatin‘ and workin hard” and his Louisiana-rooted culinary skills, he created Dat Creole Soul, a nonprofit business in Seattle. He takes his cooking a step further by sharing hot plates with people who are homeless.

Whether he’s setting up shop down on Pine St. or at an annual festival or family reunion, when you see his Creole Soul truck pull up you know you’ll be taken care of with some hot food that “will stick to your ribs” like gumbo jambalaya, shrimp et tu fe, red beans and rice.

“When I got my food truck, every time I go out on location to sell food, the food that I have left over, instead of throwing it away, I will park somewhere and I got this sign that says ‘If you’re hungry stop on by and come get something to eat,’” he said.

Born and raised in New Orleans, Isom says he grew up poor and knows what it’s like to be hungry. He says if he can help someone avoid it, he will.

“I grew up in the projects, food stamps the whole nine yards. I’ve been there. I know what it’s like to be hungry, I know how it feels to be cold,” he said. “It’s easy to give. Everyone has to eat plain and simple. More importantly, the world just needs to come together as a whole and everybody needs to be nice to somebody, it doesn’t cost anything to be nice.”

Before applying to work at Alaska, Isom was nervous that a 7-foot tall Black man might not be the best fit for working inside of an airplane all day or night, but it happened. Not only is he giant by nature—many airlines do have maximum height limitations that fall well under 7-feet—but he’s also a ‘Giant’ to people in his community.

“When it comes down to the grind, everyone I work with is ‘in.’ I use that same motto when I’m helping the homeless—I’m all in—whether I get donations from somebody or whether I gotta do it myself,” Isom said. “If I don’t get donations or a lot of stuff I just go out of pocket because I chose to go down this road to feed people and I will do it until I can’t do it anymore.”

Over eight weeks, Brawny® asked consumers to nominate their friends, family members and neighbors who are making a difference. Brawny® recognized and supported recipients like Isom (of course) with paper towels and donations to help him and others continue the work they are doing.

“Being a giant has nothing to do with a person’s height but everything to do with the action they take to bring good to this world,” says Katie Kolesky, Senior Director of Brand Building, Brawny®. “Giants like Hampton embody the Brawny® brand purpose of inspiring others to overcome life’s challenges with strength and resilience and do things from their hearts without expecting anything in return. We’re honored to help him continue to cook meals with love, kindness and compassion.”

Michelle Spackman, an Alaska flight attendant based in Los Angeles, nominated Isom for the award. She says she’s only met him a handful of times but he made a lasting impression on her and that he just has something about him.

“He could not be a more deserving person. Forget the fact that he is 7 feet tall and what he is doing with the community. Just as a person, Hampton is remarkable. There’s no other word that describes him,” Spackman said.

Alaska talks about going above and beyond and when you go through his posts, you see what he’s doing with the community and he even takes his time to go out to hand out flyers that say ‘my truck will be here at this date and this time and if you want a hot meal I will be here.’”

Spackman says she is normally the type of person who fast forwards through commercials and for whatever reason, she stopped to watch the Brawny® Giants Initiative commercial. She says the first person that came to my mind was Hampton.

Whether he won or not, I’m glad there was somebody, a virtual stranger, who did something for him and to affect his life. He’s a legend in the making.” – Michelle Spackman

For more information about Isom & what’s on his menu visit Dat Creole Soul’s website and check out other Brawny® ‘Giants’ taking action here.

Katharine McEntee contributed to this story.