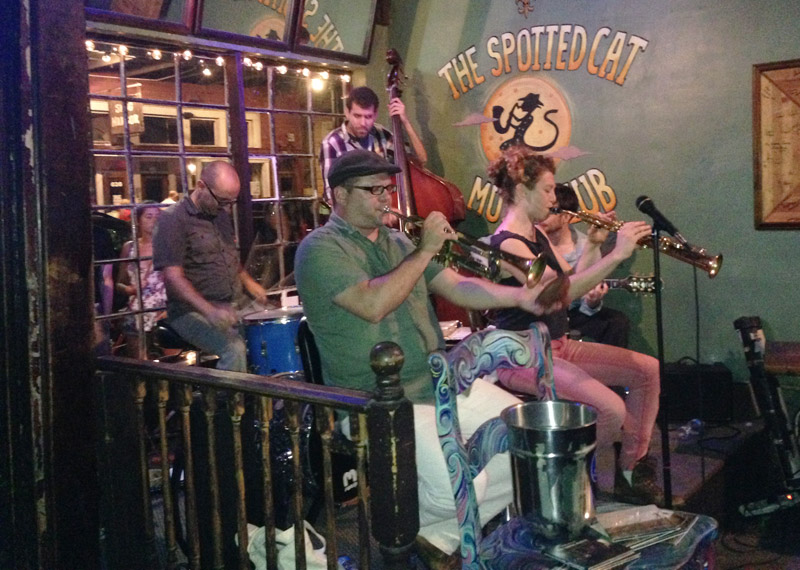 This is the first in a multi-part series about Alaska Airlines’ new service to New Orleans.

The last time I was in New Orleans was nearly 20 years ago when I was working as a room steward on the American Queen, a sternwheeler plying the Mississippi River with passengers on a week-long cruise of Mark Twain’s South.

During our short shore leave, the boat crew was mainly interested in finding the tallest alcoholic beverage possible (20-ounce hurricanes are standard),  gawking at street performers and partiers on Bourbon Street, catching beads during the Mardi Gras parades and stumbling back to the boat before push off the next day so we wouldn’t be left behind without a job.

This time (as a passenger on Alaska Airlines’ inaugural nonstop flight from Seattle to New Orleans) I had three days – just enough time to get a small sample of all the art, food, music and culture the city has to offer. And, as a bonus, no hangover.

My weekend visit was mostly focused on French Quarter, where architectural beauty, history, music and the lauded Louisiana Creole and Cajun cuisine mix with debauchery and excess on the famous Bourbon Street. It’s the natural place to start for anyone visiting New Orleans for the first time.

While one walk down Bourbon Street at night is almost a requirement, if for nothing else than the people-watching and street performers, most people who have outgrown frat parties will prefer the still lively but more subdued Frenchman Street, just a few blocks away in the Faubourg Marigny District.

This is where many local musicians prefer to play in intimate clubs such as The Spotted Cat, where I caught two excellent local jazz bands for just $5 cover. Many clubs don’t have any cover charge, even though the music is still top notch. Free music abounds, whether it comes from street musicians, a bar or one of the many free music festivals that New Orleans hosts year-round. I attended a Zydeco music festival that attracted nationally known and local favorite artists in Louis Armstrong Park during my short stay.

If you do enjoy some music in New Orleans, whether the musician is playing on the street or in a club, tip generously. This is how they make their living and the best way to ensure a continued robust live music scene.

If you thought national parks were only about trees and nature, you may be surprised to learn that New Orleans is home to a national park for jazz. One of its sites is the Old U.S. Mint building where a free jazz museum documents the rise of the century-old form of music through photos, audio and artifacts, particularly from the Preservation Hall music club, where many of jazz’s legends have performed and the New Orleans jazz sound was refined. Live music performances are frequently offered here.

Besides jazz, blues, Cajun and Zydeco, New Orleans is home to many other styles of music including rock, folk and pop.

New Orleans is Alaska Airlines’ 74th nonstop destination from Seattle. The new flight is the only nonstop between Seattle and New Orleans, and will save passengers an average of four hours round-trip. Ready for your trip? Book now.

Do you have any New Orleans travel tips? What can you recommend about The Big Easy?