When Alaska Airlines began service to Havana on Jan. 5, it wasn’t the first time the airline had flown to Cuba.

In the early 1970s, Alaska flew U.S. Military Airlift Command charter flights to the base at Guantanamo Bay, as well as charters to Caribbean locations such as Jamaica, Puerto Rico and Panama.

Some of the flight attendants from that era still fly for Alaska Airlines today, including Julia Simmonds, Joanne De Cicco, Lynn Odell and Gail Spaeth, as well as Jackie Fay, now a lead reservations sales agent.

“It was all very exciting for a young woman of 20 years of age,” Simmonds said. “We flight attendants were still in our VERY short Russian uniforms at the time, which the military men enjoyed very much.”

“We had to fly during daylight hours – if not, we could have been escorted by the Cuban military,” Fay added. “No pictures, but it did not look like a resort area.”

Additionally, Ed Fischer, a director in Alaska’s System Operations Control, grew up on the base at Guantanamo Bay, where his father was a teacher. As a 4-year-old boy, Fischer flew on an Alaska Airlines charter flight to Cuba in November 1970 – a Friday the 13th.

“My mother said that must be why we lived there so long,” said Fischer, who graduated from W.T. Sampson High School on the base in 1984.

Joanne De Cicco, at left in a photo from the early 1970s, worked on the charter flights to Cuba. She’s still an Alaska flight attendant today.

It was a time when Alaska Airlines was struggling under then-CEO Charlie Willis, a colorful WWII veteran. Before airline deregulation led to Alaska’s route expansions in 1979, the airline’s scheduled service was limited to the state of Alaska and only as far south as Seattle. In an attempt to make money, the airline flew charter flights all over the world, including Russia. (That’s why Alaska’s flight attendants wore red-and-black Cossack uniforms, and served tea from Russian Golden Samovars.)

“As late as 1970, the airline was down to only three passenger jets, and Willis was still scrounging for charter business,” Robert Serling wrote in his book Character & Characters. “One little-publicized plum fell into his lap when Eastern dropped its authority to fly charters out of Charleston, South Carolina, to the Navy’s Caribbean bases. Willis assigned a 727 to the charters, along with nine pilots and 12 flight attendants who were temporarily based in Charleston.” 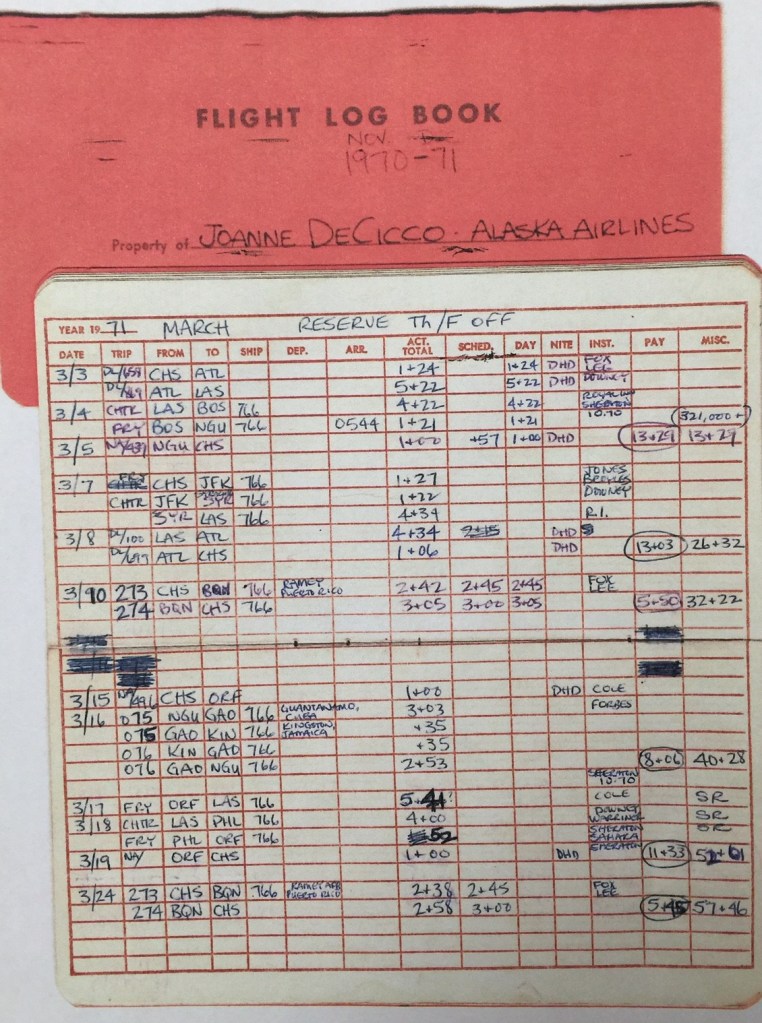 De Cicco still has her flight log book that shows the daily charters to Caribbean destinations.

“I did indeed work a military charter flight to Guantanamo on March 16, 1971 when I was based in Charleston,” De Cicco said. “I am sorry that I never carried a camera or a ‘diary’ back in those days, so I don’t have any pictures. We didn’t stay overnight but had about one to three hours on the ground. Sometimes we had lunch in the Officers Club or did a little shopping in the airport.”

“We had to pay for our rooms and cabs and then submit them on an expense report,” De Cicco added. “Sometimes the reimbursement would take a few months to get all the way from Seattle to Charleston! We were floating a loan for a financially troubled airline.”

Alaska flew charters for the government during the week, then flew private charters on weekends.

“I have a very strong memory of flying from Kennedy to Las Vegas, with a very party-minded plane full of dentists!” Simmonds said.

“One of my most vivid memories was when Captain Clark Cole called me to the flight deck as we departed on climb out from Cuba, to show me a passing aircraft that was being hijacked from the U.S. to Cuba! Yikes!” Simmonds said. “It all seems very surreal as I look back now: open access to the flight deck, gun closets, wine closets.”

A slice of Americana, surrounded by mine fields 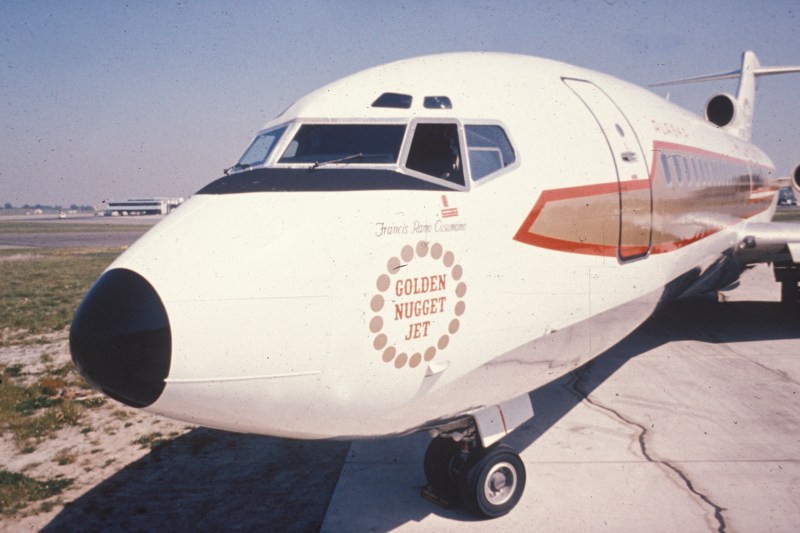 Alaska flew charters to Cuba on a Boeing 727.

Fay says the flights from Naval Base Norfolk to Guantanamo were very subdued, as military personnel reported for work. It was a different story on the departing flights – that’s when people were leaving for R&R.

Locals employed at the base included exiled Cubans as well as some Jamaican families.

“You could tell they had been around American military GI’s,” Fay said, “They would board with LP’s in hand, with guitars, and greet you with ‘Hey baby, what’s happenin’!”

For Fischer, growing up on the base was like living in a small town.

“It was like a little slice of America, but most of your friends had parents in the military and they’d move every two or four years,” Fischer said. “You couldn’t go off the base. We had mine fields on the base along the fence line between the military base and Cuba. We also had beaches with some of the most wonderful snorkeling and scuba.”

“I plan on visiting,” Fischer said. “I’ve always planned on getting back, once they opened it up. I’ve got six kids in my family, and my youngest sister was born down there. It might be fun going back with her and her family, to see Cuba now, and how things have progressed.”