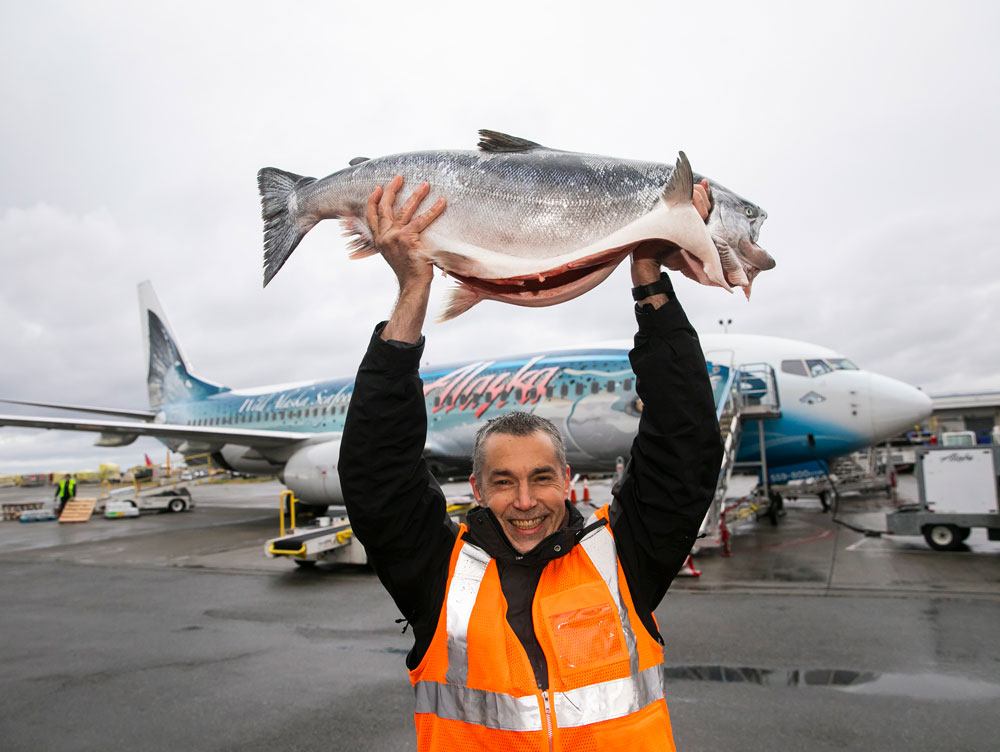 Chris Bryant, Executive Chef of WildFin American Grill, holds up the first fish, to be served in his Tacoma restaurant tonight

This week marks the official start of the 2019 Copper River king salmon season in Cordova, Alaska — and for many people, these salmon are the first sign that summer is on the way.

In celebration of the first catch, Alaska Airlines hosted a red carpet welcome for the Copper River salmon arriving Friday at Seattle-Tacoma International Airport. About 18,000 pounds of fresh fish were on the early-morning flight.

The outlook for the season is good, with the forecast for Copper River kings up from past years, and the sockeye projections holding steady, according to Christa Hoover, executive director of the Copper River Marketing Association. “We hope to see 55,000 king salmon and close to 1.5 million sockeye return to the Copper River this season,” she says.

“Cordova is off the road system here in Alaska, and we rely heavily on the passenger and cargo services that Alaska Airlines provides year-round,” Hoover says. “For nearly a decade, Alaska Airlines has flown the first Copper River salmon of the season to Seattle and beyond. In just a matter of hours, Copper River salmon is transported from the fisherman to dinner tables across the country.”

“I am an Alaskan fisherman”: A spotlight on the people who catch your fish

For the fishermen of Cordova, this moment is what they’ve been waiting for all year.

Darin Gilman started fishing with his father, Shawn Gilman, when he was only 5 years old. Growing up and watching his dad instilled a sense of pride in Darin that led him to work alongside his father at the same fishery today.

“It’s been wonderful to watch my son and the next generation of fishermen come up,” says Shawn Gilman. “I hope that they can pass our traditions and our fishery on in as good of shape as my generation was able to do for them.”

While neither man would say it’s easy work — acting as their own boat mechanics, net menders and salmon trackers — the Gilmans and other Cordova fishermen are true artisans. And they take pride in Cordova’s sustainable fishing practices. “We make sure year after year to have enough fish go up the rivers so they’ll keep coming back,” Darin Gilman says.

The Honkola family and others fishing in Cordova are dedicated to the preservation of salmon and their ecosystem, recognizing that their work today impacts what others can enjoy in the future. “To be a fisherman, you have to be dedicated, patient, and most importantly, passionate about sustainability,” James Honkola says.

Reflecting on her decades-long career, Thea Thomas recalls making the decision to follow her dream to fish in Alaska — at a time when few women worked in the industry. The best advice she received came from her father, who told her: “The most important thing is figuring out what you want to do. Don’t worry about the money, just make sure this is really what you want to do.”

Thomas thinks about retirement, but can’t bring herself to do it. “I love Cordova,” she says. “I love what I do.”