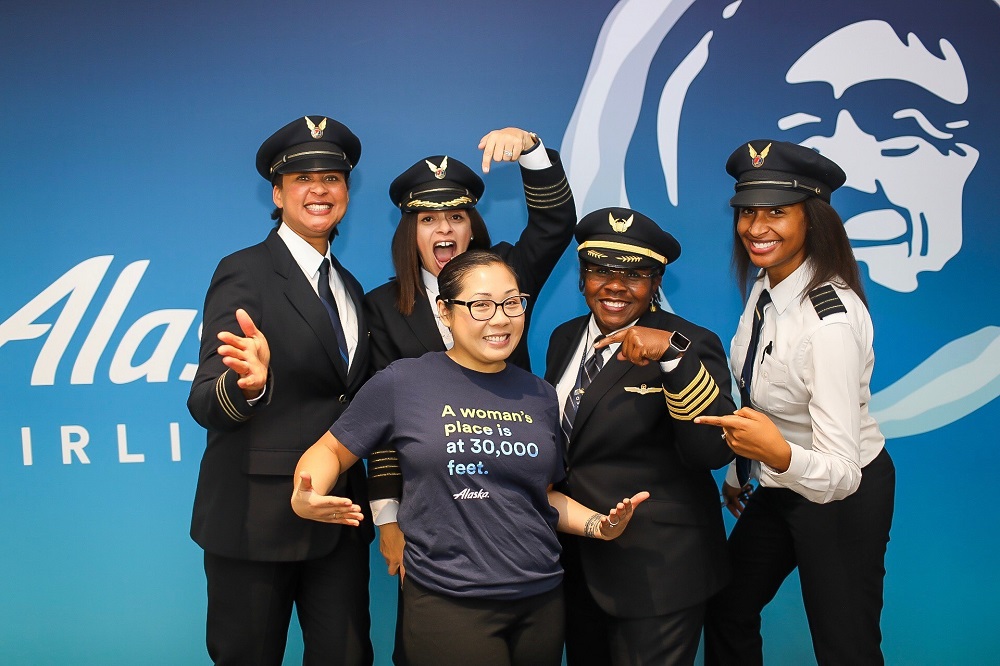 Today’s flight deck is full of incredible professionals, but also lacking diversity. Black female pilots make up about one half of 1 percent of all professional pilots across the industry. At Alaska, we’re all about people and reflecting those we serve, but this statistic is a reminder of how far we have to go.

This morning, we signed a new pledge with Sisters of the Skies, a nonprofit committed to pilot diversity. We aim to increase our female Black pilots over the next six years across Alaska Airlines and Horizon Air, and support the path to expose and inspire more young women to get there.

“When we foster an inclusive environment that recognizes, respects, and visibly reflects all people, it makes us stronger,” said Andy Schneider, Alaska Airlines vice president of people. “Quite simply, creating an airline people love is not possible unless we walk the talk around diversity and inclusion.”

Today, we only have four Black female pilots at Alaska and Horizon combined, which is about 1 percent. It begs the question: why so few?

Unfortunately, there isn’t a pool of qualified Black women ready to be hired. And creating this pool takes time.

Tara Wright, Alaska Airlines captain and Sisters of the Skies director of development, volunteers her time to try to inspire more women of color to pursue aviation careers.

“I met a high school senior recently who said she couldn’t be a pilot because her vision wasn’t good,” she recalled. “I told her, ‘Well, you’ve got some outdated information.’ We need more support mechanisms in place, so young girls of color see aviation as a viable career path.”

Wright helped shed light on the issue, when she and her co-pilot were the first all-female, Black pilot team in Alaska Airlines history on Mother’s Day last year.

“If we quadruple the number of Black female pilots at Alaska, we’ll be leading the charge. That would be a huge achievement when you consider where we are as an industry,” she continued.

With a commercial pilot shortage, it’s imperative we cultivate talent in our communities. And regardless of a shortage, it is important to build a workforce of incredible opportunity that is accessible to all.

“Amid a commercial pilot shortage, it is incumbent upon Alaska Airlines’ success to ensure that they are hiring the strongest candidates,” he said. “Diversity is an important element of that goal and we are pleased to see this partnership with Sisters of the Skies.”

The Sisters of the Skies approach to promoting pilot diversity – supporting current pilots through mentorship and encouragement, and increasing the number of future pilots with models and mentors, exposure and training – is consistent with how Alaska approaches creating opportunity.

Like anything, it is valuable to have a goal! We will honor our pledge by:

Kim Ford, Alaska Airlines first officer and Sisters of the Skies member, believes these are the right steps to be taking – and hopes our work doesn’t stop there.

“I’m so proud that Alaska Airlines is dedicated to supporting aerospace education, inspiring youth to achieve their dreams, and to increasing diversity at Alaska and Horizon,” she said. “It is also important to study the barriers to women of color getting to the flight deck and pathways to success in their careers.”

If we’re able to achieve our goal, Captain Scott Day, who oversees our pilot group, believes the benefits will be far-reaching.

“Having pilots with different backgrounds and experiences is extremely beneficial and specifically adds to the overall health of our company,” he said. “I trained to be a pilot in Bethel, Alaska, and I know it’s not easy. I remain inspired by kids from native communities who get excited about aviation and pursue the rigorous training to become commercial pilots, and am honored by the opportunity to continue advancing diversity in our profession with the Sisters of the Skies pledge.”

As a community member, not just a pilot, Ford is proud of where we’re headed and optimistic about the future.

“As a member of the community, when I see a company that values diversity, that’s a company that I want to support,” Ford said. “As an employee, that’s a workplace and a flight deck where I am proud to be!”