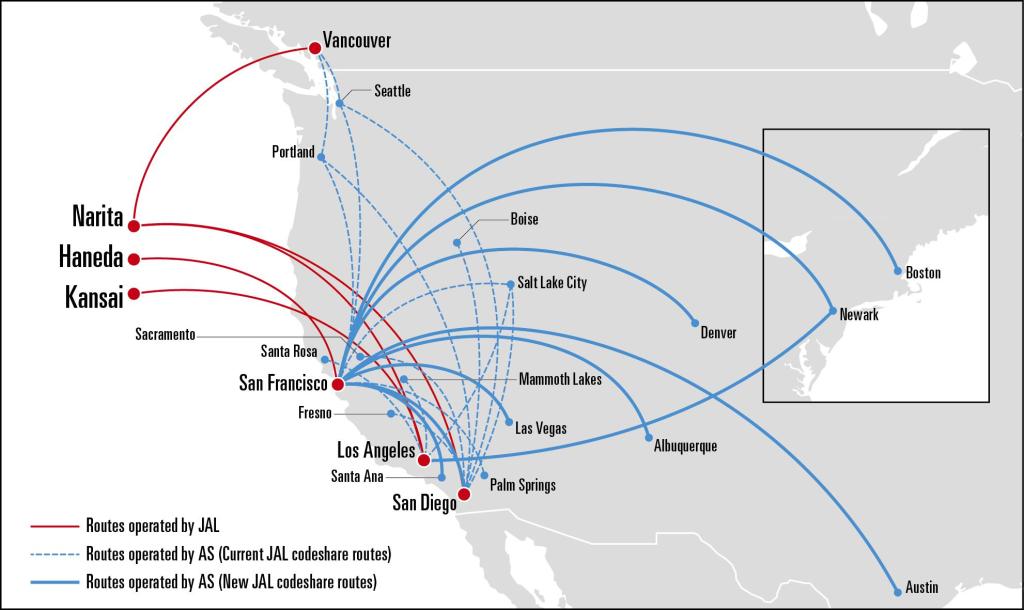 Alaska Airlines and Japan Airlines (JAL) are expanding their partnership with additional codeshare flights that include former Virgin America routes, such as San Francisco to Boston, to Denver and to Newark.

Japan Airlines will start selling tickets for the new codeshare flights on Feb. 6 for travel after May 20, 2018.

“Travelers will now enjoy an enhanced network to travel between Japan and more cities in the U.S., taking full advantage of the combined Alaska and Virgin America network,” said Charles Breer, managing director of alliances.

Alaska and JAL originally teamed up in June 2016 with a codeshare agreement and frequent-flyer partnership, providing seamless travel and mileage earning opportunities between Alaska’s gateways in North America, Japan and throughout Asia. For members of Alaska’s Mileage Plan, base miles earned and class of service bonuses on Japan Airlines count toward Mileage Plan elite status.

“We are pleased to offer our customers more routes and destinations with our new partnership with Alaska Airlines,” said Hideki Oshima, JAL executive officer, international relations and alliances. “This expanded cooperation allows JAL to strengthen its own presence throughout U.S.”

JAL operates a modern fleet of Boeing 777-300ERs and 787s between Japan and North America.

A codeshare is an agreement between airlines to sell space on each other’s flights. Each airline can sell the seats on selected flights as if they were their own, in a sense putting their “code” on the flights.  It offers a seamless travel experience for guests across the two airlines.