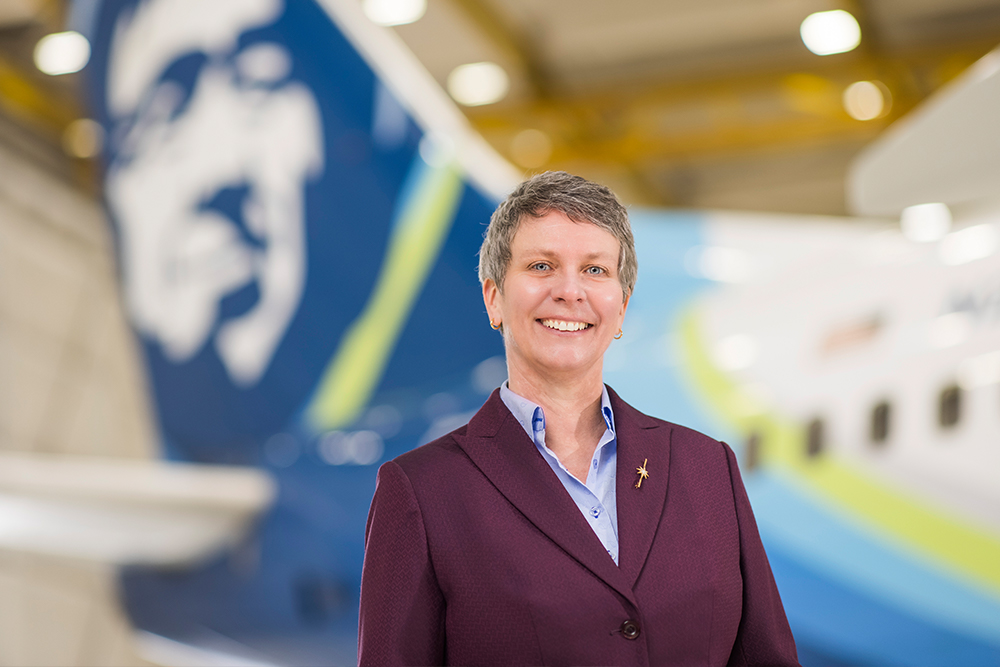 Breaking barriers is nothing new for Constance von Muehlen, our newly appointed chief operating officer. At age seven, she had her eyes set on becoming a helicopter pilot. Years later, she served as an officer  in the United States Army and became a Black Hawk helicopter pilot. On April 3, 2021, she will make Alaska Airlines history by becoming the first female COO. Today, 40% of Alaska’s executive leadership team are women.

I think women often limit themselves in imagining where we can contribute and end up, and I’m certainly an example of that. I am grateful that people, perhaps more perceptive than myself, have seen my skills in action and said I would be good at this and provided me that opportunity,” says von Muehlen.

Most recently, von Muehlen was Alaska’s senior vice president of our maintenance and engineering division. She led all safety, compliance and operational performance of our airline’s mainline Boeing and Airbus fleet. This is not the first COO position she has held within Alaska Air Group. From 2018 to 2019, von Muehlen also served as COO at Horizon Air, our regional airline.

I’ve managed a lot of complexity in my career while finding ways to simplify, as well as anticipating our business’s demands and will continue to do so as COO. The most fundamental thing I’ve learned as a leader is taking the team we have and unlocking each individual’s potential to be the very best contributor they can be. When we do that and come together, we’re unstoppable,” she said.

With 30 years of aviation experience, von Muehlen brings a strong foundation of safety and operational excellence to the COO role. We sat down with her to discuss this appointment’s significance, her leadership style, and who inspires her (hint — it’s all of our guests and employees). Check the Q&A below.

You will be named the first female COO at Alaska, as we celebrate Women’s History Month, what does that mean to you and the women in the industry and beyond?

Constance: “It is super humbling to me. My desire to represent women well is that much higher given the role I’ll serve because I want to make sure there is no doubt in anybody’s mind that all women are capable of this type of work and performance. I’m also excited to bring a different perspective to the role and a new approach than what we’ve seen before. It will be my approach, which is formed and shaped by the fact that I am a woman and have spent 30 years in the traditionally male-dominated aviation industry.”

Constance: “First and foremost—our people. Whether it be the front line or our guests, I want to understand more granularly what their struggles are and what our team is going through to deliver in their everyday work and to our guests, and how guests perceive us in delivering our service. Longer-term, I’ll focus on strategic opportunities and how to perform at ever-increasing levels despite all of the changes around us.”

Who has inspired you most throughout your career?

Constance: “My parents. In the 1950s, my mom ran her own business, which was inspiring considering the culture back then. I’ve worked with incredibly inspiring people, whether it’s been at Alaska or in the Army, and what inspires me is to support those great people as well as I can. That’s what drives me—the desire to enable every person I work with to unlock their potential.

… So, it isn’t necessarily a person, but it’s everyone, in the sense that we all deserve to have that kind of fulfillment at work. The question is, how do we do that across all these teams, processes and demands while we meet and exceed our guests’ expectations? My inspiration is doing the very best we can as a team and everyone contributing to meet a common goal.”

You’ve accomplished many groundbreaking things in your career, what propels you forward and how do you inspire other women to be trailblazers?

Constance: “I would hope someday it’s less of a ‘pioneering type’ conversation, that it’s not a path unusually followed by women but regularly followed by women. Since I was seven years old, I wanted to fly helicopters. The bug bit me —that was it, and I went from there. I never envisioned in my wildest dreams I would end up in a COO role.”

Alaska has had great COOs, how will you build on their legacy and position the company to be even better, especially when COVID is behind us?

Constance: “Fantastic question. I don’t have the answer yet. Part of it is unlocking everyone’s potential at Alaska to meet and exceed our guests’ expectations. The shortest answer I can give is, I’m only as good as my work tomorrow. I prefer to come back in a year or two and say, ‘did I or did I not do that?’ I intend to do everything we set out to do, and a big part of that success is how we can achieve that as one team.”