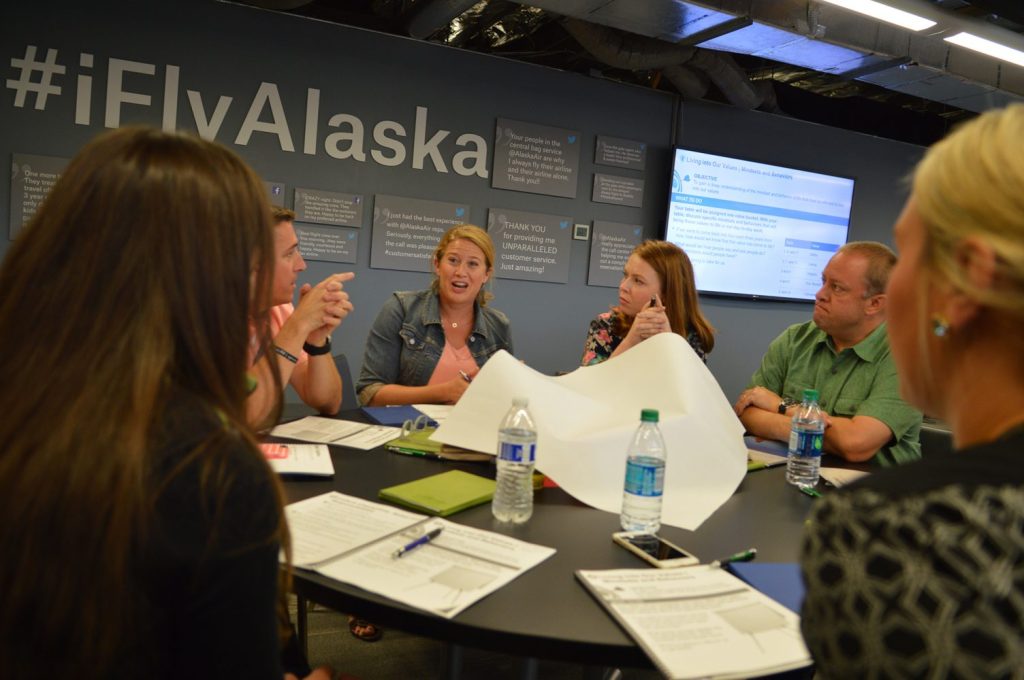 When Alaska Airlines and Virgin America announced plans to merge earlier this year, one of the biggest questions was how the two airlines would blend their distinct cultures.

“Culture has been a real challenge in many mergers, so we’re working to do things differently,” said Ben Minicucci, Alaska President and COO who will also become CEO of Virgin America today. “We are being very thoughtful about culture and are working to create an environment that reflects who we are and where we’ve been, that also enables us to work together, be bold, and succeed in a rapidly evolving industry.”

On the surface, Alaska and Virgin America might seem very different. Culture, however, isn’t defined by how the airlines look to the outside world. Culture is defined by the people behind the airlines – their customs, beliefs, attitudes, behaviors and the ways they work together.

While some teams are working hard to integrate the nuts and bolts of the airlines – the systems, processes and procedures – another group is focused on merging cultures.

“You can’t create a culture solely from the top down,” Minicucci said. “Our employees and our teammates make culture happen. The leadership team and I are fully committed to leading our cultural movement. I’m confident that we are going to learn so much from each other as we work toward creating an airline people love.”

On the inside, the cultures of Alaska and Virgin America are very similar. Employees and teammates work together, focus on their customers and do what it takes to get the job done. Both airlines have always been about doing things a little bit differently to offer something better for travelers.

When merging these two cultures, the trick is doing it in a way that makes them stronger together.

How the airlines are coming together

Each company’s unique culture has formed over time, built on a history of shared experiences, priorities, and lessons learned by overcoming adversity.

When it launched only nine years ago, Virgin America started out to be different and challenge the industry. Virgin America is a disrupter, with employees working hard to create an airline people love. That new approach quickly gained a loyal following.

Some of that basic grit – being resilient, blazing a trail, building a reputation – is also part of Alaska’s DNA, and it’s why the airline has been successful for almost 85 years. Alaska has had to reinvent itself many times over the years, while aspiring to be innovative and showing its caring heart.

The two airlines have many shared traits, which gives them an advantage when it comes to merging cultures.

Both Alaska and Virgin America are airlines that have always shared a relentless dedication to our customers. Both airlines have racked up a ton of awards for customer service. They both place an emphasis on innovation and technology to improve the travel experience.

Despite these similarities, there are some cultural differences. For the merger to be a success, each airline’s culture will have to evolve – Alaska, Virgin America and Horizon Air’s employees will have to lean into one another’s culture.

A thoughtful approach to culture

In a study of 162 executives involved in mergers, 69 percent said the top challenge was integrating two organizational cultures.

So to integrate the cultures, Alaska and Virgin America are depending on the people who know best: employees and teammates.

The information is being used to help integration planners identify similarities between the airlines, as well as areas to work on as the two airlines integrate.

“We anticipate a smooth integration, but we are not naïve,” said Stacie Baker, who is leading the culture work. “We will have bumps along the way. One thing we are striving for right out of the gate is building trust with each other. Over time, we believe that will lead to amazing things.”

Shaping the conversation around culture

Here are some of the ways that people from Alaska, Horizon Air and Virgin America have helped shape the culture conversation.

Step 1: Teams come together to set our focus

In early May, about 60 leaders from Alaska and Virgin America came together in Seattle to kick-off the integration effort. With the goal of making this the best integration ever seen in the airline industry, the team agreed that two vital areas of focus are company culture and guest experience.

Step 2: Listening to employees and teammates

In June, all employees and teammates at Alaska, Horizon and Virgin America were invited to take an online culture survey.

Also in June, integration planners conducted a series of focus groups with Alaska and Virgin America employees and teammates to learn more about the cultures of the two companies.

“One interesting take-away from the Alaska focus groups is that we asked participants, ‘What advice would they have for their fellow co-workers?’ The overwhelming response was that we all need to be open to change as we move forward,” said Baker.

The culture team interviewed 16 senior leaders for their thoughts on culture. The team also spoke with some of Alaska’s most tenured employees who joined the airline via Jet America in 1987. The team also interviewed Horizon employees to get their perspective – Alaska Air Group bought Horizon in 1985, and combined many back-office departments in 2011 when Horizon shifted to an all-capacity purchase agreement business model.

In August, Alaska employees and Virgin America teammates were invited to share their opinion on company values. The “Values Jam” was an online discussion forum where employees of the two airlines shared thoughts about what company values are important to them.

In September, about 100 people from Alaska, Horizon and Virgin America met in Seattle to talk about the important role that culture will play in the success of our proposed combination. The role of these “culture champions” is to make the cultural integration of the organizations as smooth as possible. Over the next year, they’ll let leadership know what’s working and what isn’t – by sharing, listening, talking, role modeling and bringing feedback to leaders as well as their peers.

A program for company leaders, called “LIFT,” will bring together 300 Virgin America leaders and 30 Alaska leaders around alignment and expectations.

How will leaders know whether the culture work is successful? There are a lot of ways to ensure the airlines are hitting the mark. The first is for us to watch to see how employee groups interact with each other. When employees enter a break room, is Alaska on one side and Virgin America on another? Over time, are employees connecting with their roots or are they embracing the future? Is teamwork happening across groups? Leaders will also be paying close attention to measurable results in Alaska’s annual engagement survey.