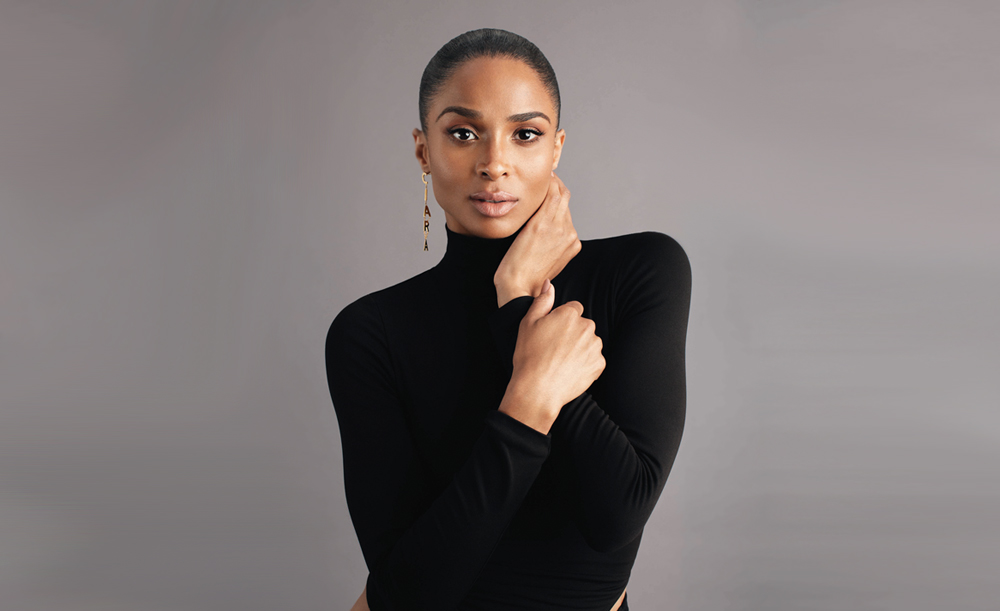 Many of us toast the new year with sparkling wine, celebrating with a few friends and family. Ciara? She marked the 2020 ball drop with roughly 10 million people, as one of the hosts of Dick Clark’s New Year’s Rockin’ Eve. This is the third year the superstar has anchored the show’s Los Angeles festivities, helping the world ring in not only a new year, but a new decade.

The year 2020 feels like such a major milestone,” Ciara muses. “To be a part of the start of that, there’s a strong feeling of wonder. And on a personal level, there’s a sense of curiosity. I’m so curious what 2020 will bring.”

For Ciara, who wrapped up 2019 after a hot streak of accomplishments, the next decade is bound to bring wondrous things, indeed. Born in Fort Hood, Texas, as Ciara Princess Harris, the future media mogul was living in Riverside, Georgia, at age 14 when she watched music artists perform on Good Morning America. That experience inspired an uncanny clarity that she was destined for stardom. The singer, dancer and songwriter was soon signed by a label, and by 2005, she had risen to fame with the triple-platinum album “Goodies.” In the 15 years since, she’s released top-10 singles, earned a Grammy Award, led projects that included not only songs that she wrote but also songs that she co-wrote with stars such as Missy Elliott, and been named a Revlon global ambassador. And she was only warming up.

In 2019 alone, Ciara graced the covers of Vogue Arabia and InStyle magazines, toured in support of her album “Beauty Marks,” and launched a production company with her husband, superstar quarterback Russell Wilson. She appeared atop a float in New York City’s Macy’s Thanksgiving Day Parade just a few days after her triumphant hosting of the American Music Awards on November 24. She dazzled in nine outfit changes—each ensemble breathlessly covered by the fashion media—and brought audience members to their feet with a red-hot performance of her new song Melanin. It’s a proud anthem by and to women of color.

She is understandably proud of Melanin, which features vocals by Ciara and some of her close friends. Oscar-winning actress Lupita Nyongo gave her rapper alter ego, Trouble­maker, a professional debut on the track. “Lupita was game to get into the studio,” says Ciara. “And one of my best friends, La La Anthony, she has never rapped on a track before either, and she did it, too. Everyone had their own flavor.” For example, Nyongo raps about her heritage, being “Mexican born but a Kenyan queen”; Anthony, who identifies as Afro–Puerto Rican, has a verse about being a confident “Butter Rican bae.”

Ciara says: “This is a song for every young girl, for every woman, for everyone, who can make their own roll call. What are the words and ways you describe who you are? It’s a special thing we had, to inspire all the melanin queens to love the uniqueness of your skin tone; to love that about yourself and embrace the tapestry of skin colors that makes up humankind. I’m speaking to specific cultures, but ultimately it’s a song for everyone.”

In 2016, Ciara married Russell Wilson, forming a true power couple. Like Ciara, Wilson has talent, an entrepreneurial spirit and an interest in making the world a better place. (In case you missed it, he also graced the cover of the December issue of Alaska Beyond.) The couple live with their daughter, 2-year-old Sienna, and Ciara’s son from a previous relationship, 5-year-old Future, in Bellevue, Washington. Ciara and Russell often work side by side on philanthropic projects for the Why Not You Foundation, founded by Wilson in 2014 to empower young people to be future leaders. Last spring, they unveiled a new program awarding $100,000 in college scholarships to eight deserving students in King County—just one of the many initiatives the foundation supports.

The couple also have announced the formation of Why Not You Productions. Building on positive energy, the new company will focus on producing scripted and unscripted film, TV and digital content, with an eye to inspiring narratives.

With such jam-packed schedules, Ciara cherishes the simple times when she and her husband can kick back and relax together. “Russ and I love TV night,” she says. “In the evening, as things wind down, we just enjoy a show. It’s harder now, to find that chill time. Because even when the world slows down, my kids don’t. Someone is always doing something, like karate or swimming.”

Ciara’s commitment to family shines through in her role as an executive producer and judge on the new series America’s Most Musical Family, which premiered last fall on Nickelodeon. “It’s been such a treat to be a part of that producing team and team in general,” says Ciara of the show, which features 30 families showcasing their musical prowess to compete for a $250,000 cash prize and a recording contract. “There’s a lot of diversity,” says Ciara. “We had a band where each brother can play seven instruments. We had another group with a grandmother in it. I hope it’s inspiring to people. The power of music is real. Music can bring together people of different backgrounds and economic groups. Music can heal you, inspire you, uplift you.”

Making Her Own Mark

After years of being on other labels, Ciara stretched her wings in 2017 and founded her own record and entertainment company, Beauty Marks Entertainment. BME—which she heads and is very hands-on with—places music in the center of her Venn diagram of interests: media, fashion, philanthropy and technology. “The landscape of the music industry has changed so much since I was putting out my first album 15 years ago,” she explains. “It’s a whole different ballgame.” Ciara is well aware of the impact of social media and the evolving way songs are distributed, having tallied 1.4 billion music video views and 24.1 million followers on Instagram herself.

BME released several singles by Ciara, then in May 2019, an album, also titled “Beauty Marks.” Ciara plans to continue to release her own music, as well as eventually produce music with other performers. Like many of her peers in the artistic community, she says she is looking for ways to be empowered in her business and to reap the benefits of her own labor, she says. “Owning my own masters, for example. It’s a new day. It’s recognizing your value.”

As one of the entrepreneurs leading change in the music industry, Ciara recently immersed herself in one of Harvard Business School’s Executive Education programs. She calls it “one of the most important experiences of my life,” and studied with Harvard professor Anita Elberse, an acclaimed expert in digital media strategies, for a short course in “The Business of Entertainment, Media, and Sports.”

Ciara has gone from being a young teen watching Good Morning America to being booked onto GMA herself. In fact she had a performance scheduled while she was taking her Harvard course, but was able to make both opportunities happen. She flew from Boston to New York the night before, performed on GMA, and hopped on a return flight to Boston so she could be back in class that afternoon.

The program was worth it, Ciara says. “I left that course feeling like I was enlightened. I felt 10 times more prepared for what I was doing in business. The case studies were amazing. I took lots of notes. I honestly want to go back to school again.”

For BME and Why Not You Productions, she says, there is “a lot brewing that we can’t reveal quite yet, but we are leveling up with more TV and film, more music, more visuals for the fans. I’ve enjoyed having that direct control and access to my fans. It’s important to me to keep this unique relationship with my fans I’ve always had. I’ve been learning a lot, having the creative freedom to express what I want to express, when I want to express it.”

Ciara recently served as creative director for Finish Line’s fall collections of Nike- and Jordan-brand products for kids, imbuing the family-friendly selection of athletic attire, shoes and accessories with her personal sense of style. She also fronted a fall campaign for Nine West for Kohl’s collection. And the standout style trendsetter plans to make more waves in the fashion world.

I’ve always had a love for beautiful designs and fashion. What good are the visuals without the fashions?” she says, referring to her mega—popular music videos. Stay tuned, she adds, because “I am cooking up something cool.”

She’s also intrigued by technology. “It’s becoming such a dominant force in how our world functions and thrives,” she observes. “Will we be flying around like the Jetsons? We haven’t gotten there yet, but we aren’t too far away, either. In 10 years, my children will be teens, and I know I’m going to go on an incredible adventure with them as a parent.”

She wants to keep working on ways to level up professionally, too. “I’m going to declare 2020 as the start of the best decade yet.
“For me, my biggest desire is to have a fruitful life,” she says. “I think about my life way ahead, and the reality is, we are not going to always be here. I’m very spiritual. I’m a believer. I have to talk to myself and say I have to maximize life, maximize opportunities, and put everything into my life and into the universe that is good. That’s my approach.”

Ciara is a firm believer in literally speaking positively. “There’s life and death in the tongue, I always say. You have the chance to tell your life story, so when you speak, say great things. When you say, ‘I can’t do this’ or ‘I’m so silly trying that,’ you’re speaking energy onto yourself. If you say you can, you start to will yourself toward it happening. You’re giving yourself confidence; you’re supercharged to make the things you want to happen, happen.”

For all her intensity and drive, Ciara is not all about seriousness.
“I love laughing, I’m goofy,” she says. “I’m one of those people who looks for the positive in anything. If I’m going through a difficult moment, I’m like, let’s get to cheer; let’s get back to joy. I’m really committed to that.”

This article was originally published in Alaska Beyond Magazine, January 2020 issue.