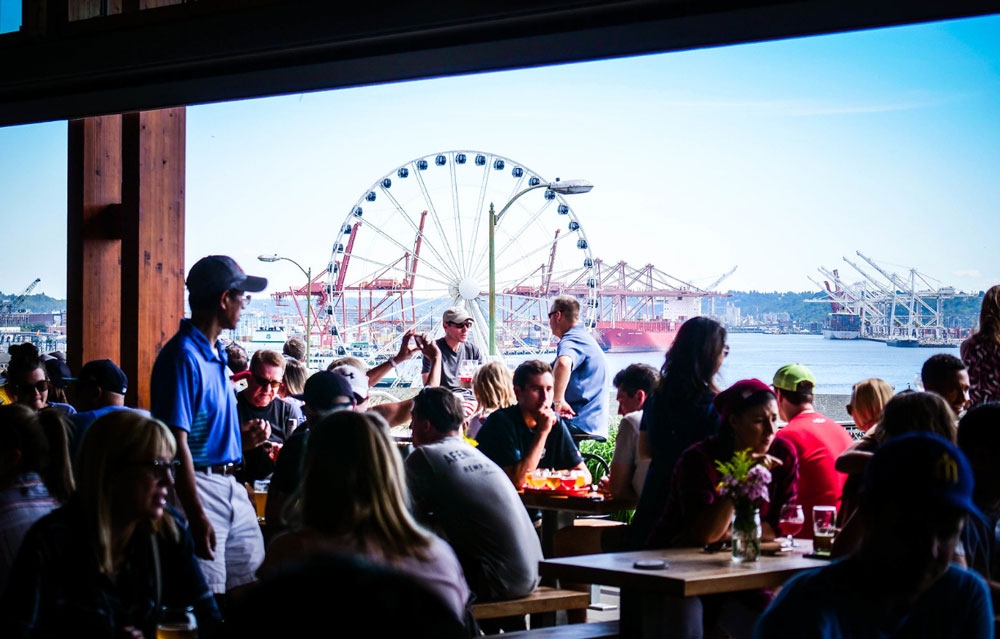 Old Stove Brewing has a view of the Great Wheel from its Pike Place Market location in downtown Seattle. (Courtesy of Jenna Haar Photography)

Beer tourism is a real thing. For hardcore aficionados, these adventures take the form of singularly focused “beercations” – but for most travelers, visiting local taprooms is simply part of the overall vacation plan. More than three-quarters of respondents in a 2016 Travelocity survey said they would like to go on a trip that included visiting craft breweries and sampling local beers.

It’s hard to define, but a taproom feels different from other drinking establishments. Something about visiting a brewery feels authentically local – providing a greater understanding of a place and its people. And of course, sampling beers you can’t get at home is its own reward.

Good news for thirsty travelers: Alaska Airlines offers flights to the West Coast’s top beer destinations – and features regional craft beers inflight to enjoy along the way. Throughout the summer, outdoor festivals in each city offer the chance to sample a variety of craft beers and soak up the sun at the same time.

BELLINGHAM, WASHINGTON: Located along Interstate 5, 50 miles south of Vancouver, B.C., this small city (population 90,000) boasts a dozen breweries. Nearby access to year-round outdoor activities attracts all types of adrenaline junkies and nature lovers, but the density of breweries in this laid-back burg make it a destination for beer enthusiasts. The oldest brewery and pub, Boundary Bay Brewery, remains a local favorite, while newer breweries like Chuckanut Brewery and Wander Brewing have earned regional and national acclaim. For more on Bellingham’s breweries, consult the Tap Trail.
Coming up June 29: The Sixth Annual Bellingham Beer and Music Festival

SEATTLE, WASHINGTON: There are more than 60 breweries within city limits, so you won’t have trouble finding one regardless of where you’re staying. The Ballard neighborhood offers the greatest density with 11 breweries within walking distance of each other. Don’t miss Stoup Brewing and Reuben’s Brews, two rising stars on the local beer scene. At Fremont Brewing, which crafts the Lush IPA offered on Alaska flights, visitors can settle into an urban beer garden setting. Downtown at Pike Place Market – a favorite destination for crowds of visitors and locals alike – be sure to check out Old Stove Brewing’s MarketFront location, where the brewery and tasting room offer an expansive view of Elliott Bay and the majestic Olympic Mountains. For more on the Seattle beer scene, check out my Washington Beer Blog.
Coming up July 12-14: Seattle International Beer Fest

PORTLAND, OREGON: Aptly nicknamed “Beervana,” Portland embraces craft beer as an essential part of its identity. Plenty of proud locals claim it’s the greatest beer town in America – and they’re probably right. You’ll have no trouble gathering recommendations about which of the Rose City’s more than 60 breweries to visit, but adventurous beer drinkers should not skip Hair of the Dog Brewing or the Cascade Barrel House. The Oregon Brewers Festival, held in Portland in July for more than three decades, typically attracts more than 50,000 festivalgoers. Dive deeper on the Portland Beer Blog.
Coming up July 24-27: Oregon Brewers Festival

BEND, OREGON: In the heart of the Cascade Mountains, Bend boasts 22 breweries and a population of just 80,000, making it one of the nation’s leaders for breweries per capita. In winter, earn your beer by swooshing down the slopes at nearby Mount Bachelor. In summer, daydream about beer as you float lazily down the picturesque Deschutes River, which bisects the town. Don’t miss Deschutes Brewing Company, one of the oldest breweries in Oregon, and be sure to catch a breathtaking sunset from the beer garden at Crux Fermentation Project. Plot your path on Bend’s Ale Trail.
Coming up Aug. 15-17: Bend Brewfest

SANTA ROSA, CALIFORNIA: Located at the north end of Sonoma Valley, a region renowned for its wine, this is home to one very important brewery: Russian River Brewing, makers of Pliny the Elder and Pliny the Younger, two of the nation’s most ballyhooed beers. (They make a lot of other fantastic beers, too.) They release the ultra-rare Pliny the Younger just once each year, in February, and the event draws about 16,000 beer tourists from around the world. A 2016 study found visitors hailed from 40 states and 11 countries. Any time of year, all the beers at the company’s two brewpubs are exceptional, making Santa Rosa a mecca for America’s beer enthusiasts. Learn more.
Coming up Aug. 3: NorCal Brewfest

SAN DIEGO, CALIFORNIA: If perfect weather, palm trees, sandy beaches and bronzed bodies on surfboards are not enough to entice you, know that there are more than 100 breweries in the area. North of town, in nearby Escondido, Stone Brewing Company’s World Bistro and Garden offers a 1-acre alfresco beer drinking opportunity in what is described as an organic beer garden. If you’re looking for a more typical San Diego brewery experience, visit Eppig Brewing or Societe Brewing, both great examples of the smaller, friendly breweries that dot the city’s neighborhoods. Learn more.
Coming up July 21: San Diego Beer and Music Festival