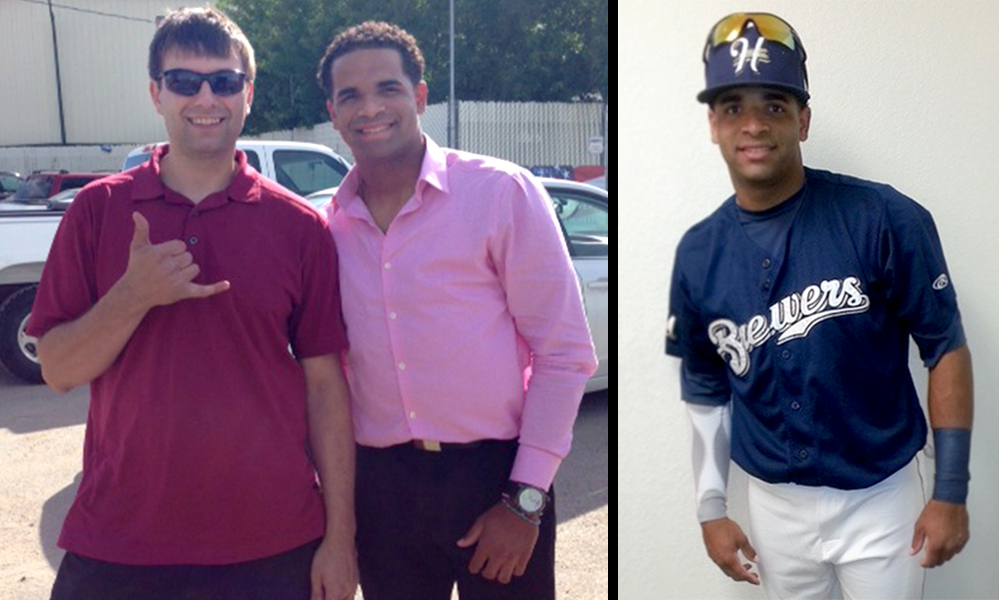 When a recently promoted minor-league baseball player mistakenly got off the airplane in the wrong city, a Horizon Air employee stepped up to the plate to deliver him to his final destination 90 miles away.

Customer service agent Andrew Joshu drove from Great Falls, Montana, to Helena to help Sthervin Matos make it to the ballpark just in time for the first pitch.

Moments later, in his first game with his new team, Matos hit a home run.

“I just want to say thank you for everything they did for me,” Matos said this week through an interpreter. “That’s something not a lot of people would do. They gave me good treatment and they were really nice. One day, if I get called up (to the Major League team), I am still going to remember what they did for me.”

The third-base prospect in the Milwaukee Brewers organization started his day July 5 in Phoenix, where he was promoted from the team’s training facility in Arizona to the Helena Brewers. The organization bought his plane ticket that morning and sent him to Seattle, then to Montana.

When his Alaska Airlines flight operated by Horizon made a scheduled stopover in Great Falls, the eager 20-year-old from the Dominican Republic stepped off the plane, ready to impress his new team and take the next step up in his fledging professional baseball career.

The only problem: he should have stayed onboard until the flight reached Helena. The brief stopover was lost in translation for Matos.

By the time Matos realized his mistake, the plane had continued on without him.

“I was feeling good because I had been called up,” Matos said later. “But at that time, I was feeling a little bit down.”

Matos approached the customer service agents at the gate.

“The coach said I have to be in the game tonight,” he told them.

The next flight to Helena wasn’t until 11:30 p.m. – too late to make it to the game. The only bus between the cities had already left for the day and a taxi would have been expensive. Matos doesn’t have a driver’s license, so he couldn’t rent a car.

“Luckily, it’s pretty rare that someone mistakenly gets off,” said Miranda Holmstrom, a Horizon customer service agent who tried to find alternate transportation for Matos. “But Saturday was one of those days.”

Instead of a three-mile hop to the ballpark from the Helena Airport, Matos faced a 90-mile drive from Great Falls, which takes more than an hour. It looked as if Matos would miss his Pioneer League debut.

“He was definitely worried about it – he was adamant that the coach told him to be in the game that night,” Joshu said. “That’s when I thought, let’s just take him. I was getting off work and it’s a beautiful drive, so I figured, why not? It worked out.”

Joshu stopped at a grocery store to buy Matos a red Powerade sports drink and they were on their way.

“He’d never been to Montana,” Joshu said.  “He said we have a very beautiful state, which we do,”

Joshu, who has worked for Horizon in Great Falls for almost 10 years, has made the drive to Helena or even Bozeman for customers who were confused or don’t speak English. For him it’s what it means to say “I am Alaska,” where he quite literally goes the extra mile in the name of customer service.

Joshu dropped off Matos at the front gates of Kindrick Legion Field in Helena with a mere 15 minutes to spare, but with just enough time to take a picture.

“I’ve been following his stats, and he’s been tearing it up ever since he got to Helena,” Joshu said. “I got a picture with him and an autograph. Maybe someday he’ll be a Major Leaguer and I can tell my kids that story.”

In the fourth inning, Matos, batting cleanup, crushed his first home run for the team.

The ball sailed about 415 feet and appeared to hit the side of the house across the street from the stadium, according to The Independent Record newspaper.

“That’s a testament to him, showing pretty good fortitude,” Helena Brewers manager Tony Diggs told the Record. “He traveled all day and he comes in and makes an impact. Was he a little tired? Maybe. But I think adrenaline takes over.”

Adrenaline, and a lift from Horizon.