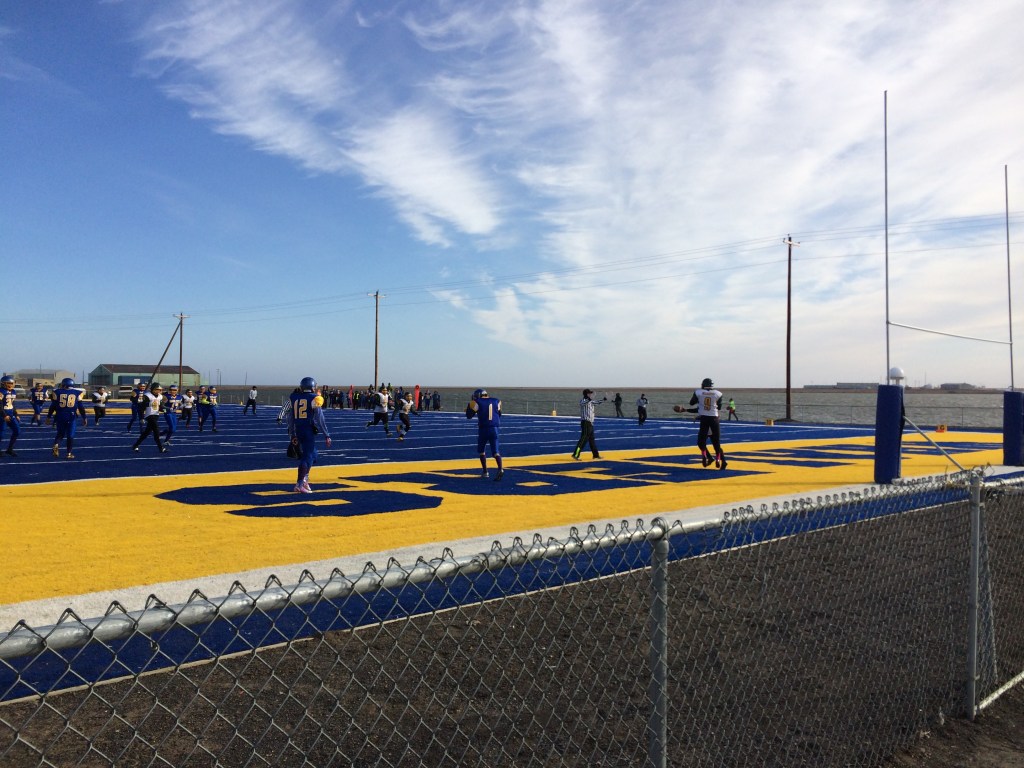 Touchdown for Seward at the Barrow, Alaska homecoming football game.

On a sunny September day 330 miles above the Arctic Circle, 22 high schoolers play what is arguably the country’s most extreme game of football.

It is a balmy 34 degrees – closer to 0 with wind chill, and parents, friends and supporters gather round the open-air field keeping warm in thick, knit hats and bowls of homemade goulash sold by the parent booster club.

A chilly lagoon borders the field on one side. On the other, the Arctic Ocean.

The football team is relatively new to Barrow, a rural community at the tip-top of North American with about 4,300 residents. The only way in or out is by airplane (often an Alaska Airlines 737-400 combi) or, when the weather permits, by barge.

And the community has embraced it. The booster club serves homemade hot meals from the concessions stand, while bundled-up spectators – with and without children of their own – watch from the stands, their cars or the warming buses – two school buses kept running throughout the games so chilly football fans have a place to warm up.

It’s not unheard of for a polar bear to wander by.

The weather outside is cold, but the community is warm in Barrow. How else do you explain the number of hot-weather transplants – from Houston, from California, from Trinidad – who came to Barrow and never left?

“It’s a very, very unique community. It’s a great community – there’s so much art, wonderful people, and rich cultural practices,” says Chris Dunbar, retired police chief and football parent. “I got here and I liked what I saw.”

So did Brian Houston, the Barrow Whalers head football coach, who moved to the small Arctic community from Boston in 1987. He’s been with the team since it was formed in 2006, head coach for the past two years.

At first, he says, many people didn’t believe football had a place in Barrow. The very existence of a football program in a town where every game requires the team to fly out, or an opposing team to fly in requires a commitment from the students, the school and the community.

“I’ve seen the program grow to where it is now and watch the young men blossom and start to take hold of the game. It’s really great to be a part of this team,” says Houston.

The program was created to be another outlet for Barrow’s young men, and to help decrease the high school dropout rate.

But after a stranger from Florida heard of the unusual Arctic football team and rallied her friends and family to help raise money for a bright blue artificial turf, the Barrow High School football program began to change the community.

For me, it was a life-changing experience. It just showed me that you can achieve anything you set your mind to and you just can’t be afraid of failure,” says Houston.

“And what it did for our community. I think it brought our community together even closer than we already were.”

The four home games each season are a big deal, as much of the town turns out to support the players and to welcome the opposing team. Visiting teams are taken care of from the moment they arrive, given meals and rides and even loaner sideline jackets when the weather turns brisk.

This year’s season wasn’t a winning one. The season ended last Saturday with a loss in the semi-final play-off game.

But Houston says this year’s biggest wins were off the field, in large part related to a new program the coaches implemented: Coaching Boys into Men encourages young men to “choose respect” in the way they treat women.

“We could have not won a single game this entire season, but if we can win over how young men perceive women in this community, in this state, I’ll take that any day,” he says.

The center celebrates the history and culture of the Iñupiat people, and features exhibits, artifacts, a library and gift shop and a room where people can demonstrate traditional crafts. Orsborn says you can sometimes purchase crafts or even find local art in stands at the grocery store and bank.

Located right next to the Iñupiat Heritage Center, the Tuzzy Consortium Library has been beautifully remodeled over the last two years and features native art in addition to books and activities.

A trip to Arctic Grocery is always an eye-opener for visitors, say Ethier and Orsborn.

“Everyone has to go to the grocery store and see what we pay for our groceries. They take pictures with their cell phones because no one can believe we pay over $10 for a gallon of milk,” says Orsborn.

Top of the World Hotel

The new Top of the World hotel – it reopened this spring after a 2013 fire – features 70 guest rooms, modern amenities and a gift shop and restaurant. It also houses Tundra Tours, Inc., which offers guided tours of Barrow and the North Slope.

You may not expect to find a delicious Chinese restaurant in Barrow, Alaska, but you’d be remiss not to make a stop at Sam and Lee’s. The food is tasty, the lunch buffet is plentiful and the owners are big supporters of student activities in Barrow, donating food to the Booster Club and scholarships to Barrow High School students.