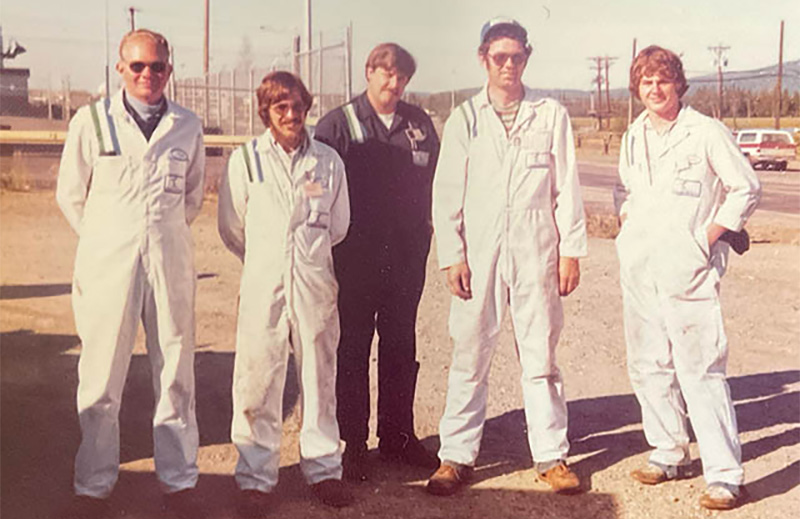 At Alaska, we have six technicians who’ve been here for 40 years or more! We spoke with Louie K., a Seattle-based line aircraft technician and John B., a Juneau-based line avionics technician, to reflect on their career and memorable moments.

Louie was only 18 years old when he joined Alaska in Fairbanks. His stepfather was the head of the Airframe and Powerplant (A&P) School at the University of Alaska Fairbanks, and many of the technicians in that part of Alaska went through that school, including those at Alaska Airlines. A&P licenses are the two Federal Aviation Administration (FAA) certificates required to become an aviation maintenance technician.

“Several students from my class were hired at Alaska – Kim H., a Seattle line aircraft technician, went through the school a year or two after I did with my younger brother,” said Louie. “I’ve known and worked with Kim for more than four decades now!”

The first aircraft he ever worked on was a Piper Super Cub, but for Alaska, it was the Boeing 727-100. Over his four decades with Alaska, he’s worked full-time at the Seattle and Fairbanks stations, had a temporary stint in Anchorage [while based in Fairbanks] and worked vacation relief for Prudhoe Bay.

In 1984, Louie transferred to Seattle working the heavy check, then the flight line. That year was memorable for Louie – in May, he did the ground handling and marshaled in Air Force 1, Air Force 2 and Pope John Paul II’s aircraft in Fairbanks.

The Alitalia DC-10 was the Pope’s aircraft,” said Louie. “I took the pictures with just an old pocket camera, but you’d never get that close today. Of course, we were screened to be working on the airfield that day for sure!”

Nearly 15 years later, he helped organize the drive for AMFA representation for technicians and related crafts and served in various local officer positions before being elected to the National Executive Council and climbing the ranks.

But of all the moments during his career, the biggest highlight came on June 1, 2019. Exactly 40 years to the day when Louie started at Alaska, his son Forrest K. worked his very first day as an A&P technician after getting awarded the bid a couple of days prior. “How cool is that?” said Louie. “We couldn’t have planned that if we’d tried.”

Today, Louie works in the Interior Shop in the Seattle hangar and is nearing 43 years with the company. When asked if he was aiming for the 50-year milestone pin, he smiled and said, “There are far too many adventures to be had! I’m fortunate to have started my career young and looking forward to the next adventure with my wife Debbie, who is a retired Alaska Airlines flight attendant of 34 years.”

Before John B. was hired by Alaska in January 1982 as a Line Avionics Technician on the graveyard shift in Anchorage, he had been working on avionics systems for the Air Force at Elmendorf AFB. When he was hired, he was in aircraft maintenance school to obtain his A&P license.

The first aircraft John worked on was a 727-200, and while in Anchorage, he worked on the 737-200, MD-80’s, 707’s and a Russian Aeroflot aircraft. Throughout his career, John has maintained aircraft for American Airlines, Hawaiian Airlines, Continental Airlines and Aeroflot Airlines.

After 13 years in Anchorage, John moved to Juneau for a change and to be closer to the wealth of outdoor activities the Southeast has to offer. In Juneau, John not only handled avionics but took on many duties alongside his team.

I like doing it all, and the technicians in Juneau are a great bunch to work with. We’re like a big family here, and I mean that in more ways than one!” said John. “In fact, my son received his A&P license and became part of the Juneau maintenance team.”

Eight years later, his family headed to sunnier skies in Phoenix but the shift in climates took John a while to get used to. “I was on graveyard shift for a few years and it was difficult to sleep during the day with so much sunlight and heat, but it was a bit more manageable when I moved to swing shift (still hot though!).”

John and his family spent 12 years in Phoenix before the pull of grandkids drew him back to Juneau. Today, he works with his son on dayshift handling avionics and general maintenance duties. He says he wouldn’t have it any other way (except he wishes Juneau had a Taco Bell).