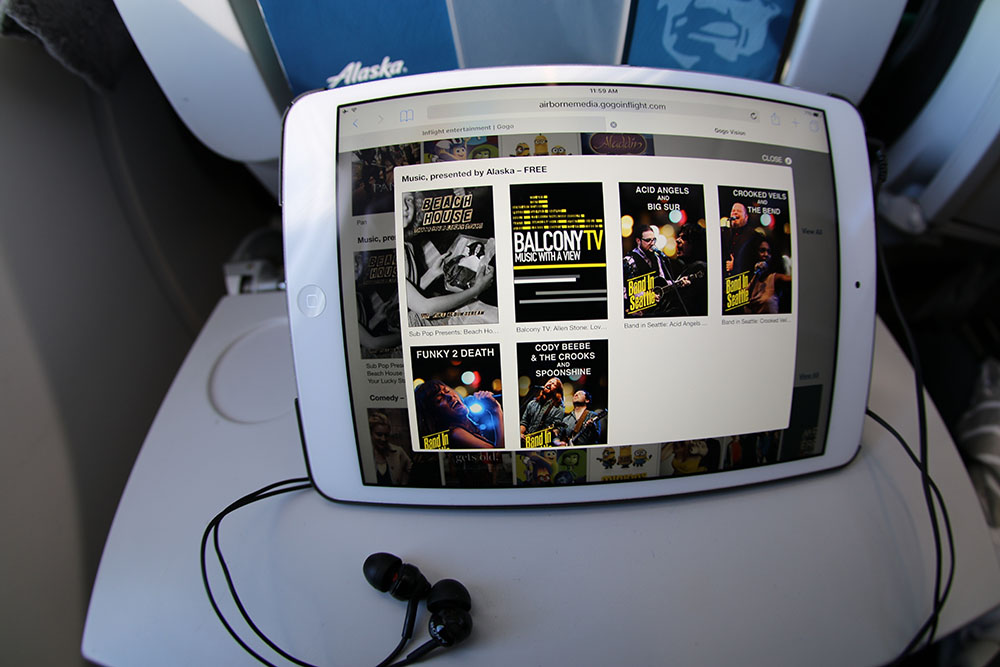 Looking for something fresh and exciting to do during your next flight? Then Alaska has some good news for you. Beginning this month, the airline is partnering with Seattle’s Sub Pop Records to bring some of the label’s best music onboard – for free.

Launched with Beach House’s latest album Thank Your Lucky Stars on February 1, the new program offers fliers the chance to listen to one complimentary featured Sub Pop title per month on Alaska Beyond Entertainment, Alaska’s direct-to-your-device inflight entertainment service, and two albums per quarter on the rentable tablets.

“We didn’t have inflight entertainment on most of our flights until about a year and a half ago,” says David Scotland, manager of inflight entertainment and connectivity for the airline, adding that one of Alaska’s priorities is to ensure that customers aren’t receiving “plain vanilla anything” aboard its flights.

“We have our own unique way of designing every experience of travel – from locally sourced food to space-enhancing seats and now music,” he continues, noting that the record label takes a similar approach in curating its artists. “And Sub Pop is a way for us to do that in the music and entertainment space.”

The partnership itself came about when a former Sub Pop employee was on an Alaska flight and tweeted to ask why the two companies weren’t working together. Soon after, the Twitter conversation turned into a real plan of action.

“There’s definitely a big appeal for doing something specifically with Alaska,” notes Chris Jacobs, General Manager of Sub Pop Records. “Because Sub Pop is so overtly and proudly associated with the region, and so is Alaska, it makes sense.”

According to Jacobs, albums selected for the streaming and tablet platforms are based on timeliness and appeal to a variety of listeners, with March’s featured album set to be Shearwater’s latest release Jet Plane and Oxbow.

“The music we put out can range pretty widely, from relatively accessible to relatively not,” Jacobs says of the label. “So we are trying to focus on bands at the more accessible end.”

In that spirit, Shearwater frontman Jonathan Meiberg sees the inflight entertainment platform as a great way to gain new fans.

“My hope is that the record feels accessible and friendly on first listen but has enough depth and detail that you’ll want to play it again,” he explains of the project, which pairs dreamy indie rock with punchy ‘80s synths. “We spent many weeks laboring over the texture and colors of the sounds.”

He also sees it as a great alternative for his music to be consumed.

“I’m just glad for the chance to reach people who might never hear our music otherwise.”

And fellow Sub Pop artist Cullen Omori, whose solo debut New Misery will be featured on Alaska flights in April, shares the sentiment.

“There’s no better audience,” says the former Smith Westerns vocalist, whose collection of genre-bending pop rock cuts hits stores March 18. “You have a captive audience that’s stuck on a plane for X amount of hours. And so, there’s no better time to pitch them some music to listen to.”

As Scotland points out, teaming up with local brands such as Sub Pop, the Seattle International Film Festival, fashion designer Luly Yang and Tom Douglas restaurants enables Alaska to deepen the relationship it’s built with core customers and provide them with a piece of home.

“One of the things that our customers from the Seattle area tell us very often is that they feel like they’re already home when they get on the plane, and there’s a comfort there.”

But it also leaves a lasting impression with customers who may be flying in the region for the first time.

“There is something cool and unique about the PNW,” he continues. “We do march to the beat of our own drum. We’re not like the rest of the country. And being an airline, we get to introduce a lot of people to some of the best parts of the Pacific Northwest.”