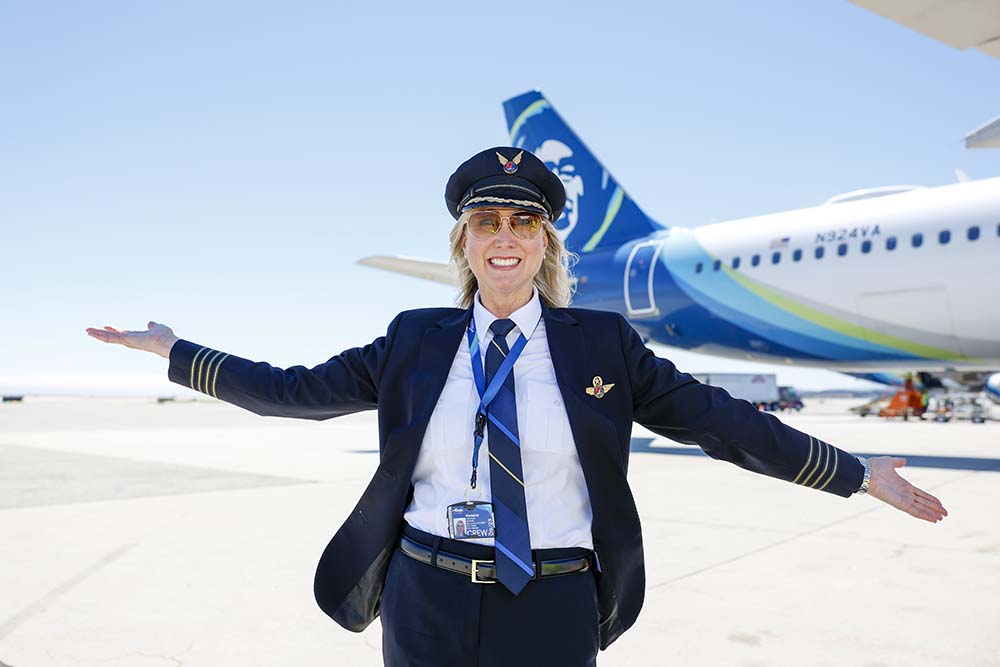 San Francisco Base Chief Pilot Kim was a young girl when she learned about flying.

“I was surrounded by neighbors and family friends, all of whom were pilots; I used to think how lucky those guys were to get to fly for a living,” Kim recently told a crowd attending the Silicon Valley Business Journal Women of Influencer Awards. “I was fascinated with anything having to do with flying and airplanes.”

But it wasn’t until years later, when she met a woman who was a commercial airline pilot, that she realized becoming a captain was actually in her reach.

“It was my ‘ah-ha’ moment that changed the trajectory of my life and ultimately brought me to Alaska Airlines,” she said.

Kim not only became a pilot – she’s made sure to teach young girls that the sky is the limit for them in the aviation industry.

“When I see a young child, I recognize the importance of stopping and taking the time and putting forth the effort to answer their questions and talk to them,” she says. “I feel like you never know when their ‘aha moment’ will happen like mine did.”

For the last 30 years, Kim has flown the Boeing 727, 737 and Airbus 320. Before her recent promotion to Base Chief Pilot, Kim was a captain and check pilot. She trained new pilots and helped with captain upgrades and proficiency checks for existing captains.

Kim makes Alaska proud as a skilled pilot but also because of her commitment to giving back.

She volunteers for the non-profit organization Pilots for Kids in San Francisco, which aims to bring a smile to young cancer patients at John Muir Medical Center by simulating “first flight” experiences.

From the comfort of their beds, the patients pretend they’re pilots taking off and landing their first flight as Kim and her colleagues act as the first officer and air traffic controller.

“I remember a young boy who was having a very difficult time, and you could hear him going, ‘Mom, this is the best hospital ever,’” Kim said. “You’re wiping the tears off your eyes because it’s pretty profound.”

Kim was among a group of volunteers who also painted a smiling airplane over a plain, white wall in the room where children receive chemotherapy at John Muir Health.

It may be no surprise to many that Kim was recently named a recipient of Alaska Airlines’ Legends Award, one of the company’s highest honors, for her accomplishments in the sky and on the ground.