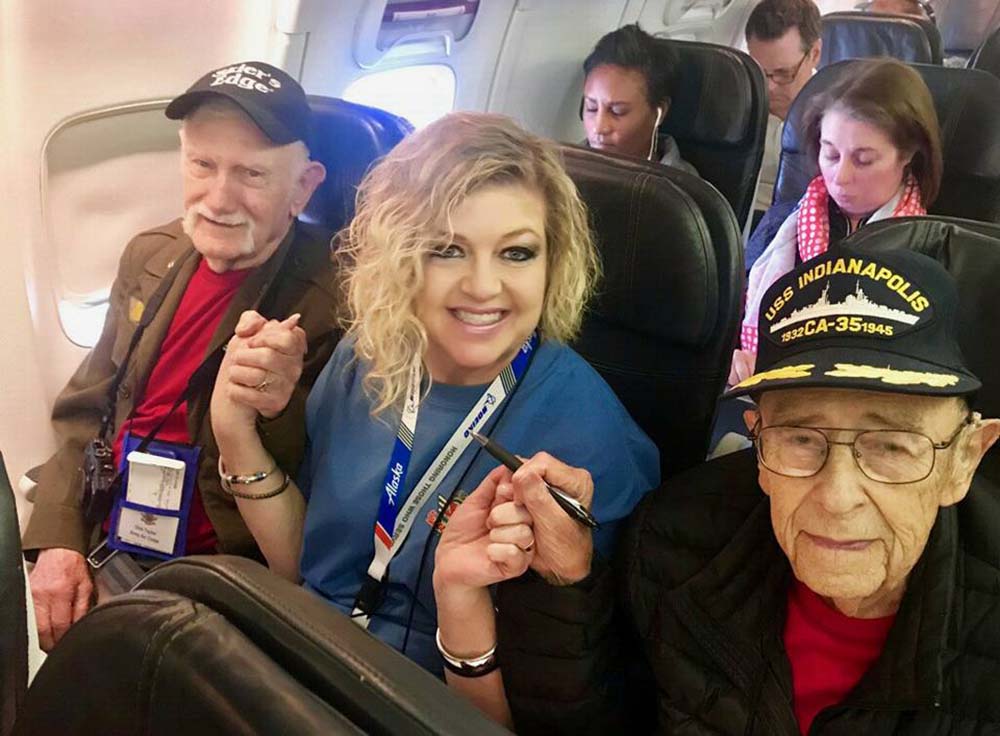 Ever since Kim Roller learned about the harrowing, adrenaline-charged accounts of the worst naval disaster in U.S. history, she commits her time to share the heroism of the men, like John Woolston pictured above, who, against all odds, survived.

When Alaska Flight Attendant Kim Roller met retired U.S. Navy Capt. John Woolston on a layover in Honolulu, she had no idea the impact he and other USS Indianapolis survivors would have on her life.

The USS Indianapolis warship sinking remains the largest loss of life at sea in the history of the U.S. Navy. Of the 1,196 crew on board, 316 were rescued from the water, and only four survivors remain alive today.

Like many survivors, Woolston didn’t speak about his haunting ordeal for a long time. He told Roller, “I may be a survivor, but I don’t want that to define me.”

The Indy’s legacy and service came to a tragic end on July 30, 1945. In just 12 minutes, the sleek heavy cruiser, spanning the size of two football fields, was sent to the bottom of the Philippine Sea after being struck by enemy torpedoes in the middle of the night.

Woolston, was an engineer assigned to the Indianapolis when it sank. For five nights and four days, he and other service men were left drifting in the ocean to battle dehydration, shark attacks and extreme conditions until they were spotted by a pilot flying low enough to see them. After his rescue, he went on to serve a total of 31 years on active duty, sharing his story with hundreds of service men and women throughout Hawaii.

Some members from the Indy crew still gather for a reunion in downtown Indianapolis to reconnect and remember. Roller attends every year and has dedicated her time paying tribute to the survivors with a multimedia presentation. She also visits as many crew members as she can when she travels.

I owe these men everything. We all do. We’re free today because of what they did so long ago,” said Roller, who was named an honorary survivor in 2013 for her dedication to the men rescued. “I’ve done this presentation for almost 20 years and it still brings me to my knees, emotionally.”

Roller developed an interest in World War II from her grandfather, a photographer in the Navy who took pictures of the Nagasaki atomic bomb. Her father also served in Vietnam. She learned about the Indy from the book, “In Harm’s Way: The Sinking of the USS Indianapolis and the Extraordinary Story of Its Survivors,” by Doug Stanton, which chronicles the sinking of the Indianapolis during World War II and the events that followed. It serves as the inspiration for Roller’s multimedia tribute to surviving members.

Since 2004, Roller has conducted multimedia presentations for universities and military functions. She dresses in full 1945 vintage attire and tells the story of Indianapolis survivors. The sessions also include some of the remaining survivor(s) and rescue crew members.

After eluding discovery for nearly 72 years, the wreckage of the heavy cruiser was finally located on the floor of the Philippine Sea in 2017 by a research expedition funded by Microsoft co-founder Paul Allen. Woolston is featured in the film, which Roller says brought him a lot of peace.

It’s fantastic, there’s no doubt about it. Of course, I never dreamt I’d be able to see it,” Woolston said in The USS Indianapolis: The Final Chapter documentary directed by Kirk Wolfinger. “This is an eyeopener for sure. Beautiful.”

A bittersweet ending to an honorable life

For years, Alaska has honored veterans with trips to see the monuments and memorials in Washington, D.C. — and even has three military-themed aircraft for the occasion.

In 2018, Roller convinced Woolston he needed to experience an Honor Flight to D.C. to visit the national monuments named in his and other veterans’ honor.

Together with the Puget Sound Honor Flight program, Roller and other Alaska employees accompanied Woolston and 50+ other veterans of the Korean War, the Vietnam War and World War II to the nation’s capital aboard our “Honoring Those Who Serve” aircraft, which is dedicated to all the brave men and women of America’s military and armed forces, along with their families.

“He went into the Honor Flight and he cried. And that man did not cry,” she said. “He was so touched by that trip and how Alaska treated everybody, he was just so amazed. And, to top it off, when he landed back in Seattle after the flight, he was met at the gate by one of his shipmate’s grandsons in his uniform saluting him. He was blown away.”

A month after his memorable trip to D.C., Woolston passed away. He was 93.

In 2013 Roller was honored with a special honorary survivor title.

We nominated and voted you in as an honorary survivor,” Woolston told her when he came out of the meeting room. “You’re one of us now.”

Honoring Those Who Serve

At Alaska and Horizon, we are grateful for the service of active-duty military and veterans, and we appreciate the personal sacrifices they and their families make for us all.

Between Alaska and Horizon, our combined fleet has three special aircraft to honor those who serve. The designs — adorned on two Alaska Boeing aircraft and a Horizon E175 — feature an Alaska Airlines Salutes medallion and a fallen soldier badge, with the Battlefield Cross to honor those who have made the ultimate sacrifice. The planes also feature five rings surrounding the engines, representative of the five branches of the U.S. military, and American flag winglets.

Learn how Alaska and Horizon support all service members, past and present.