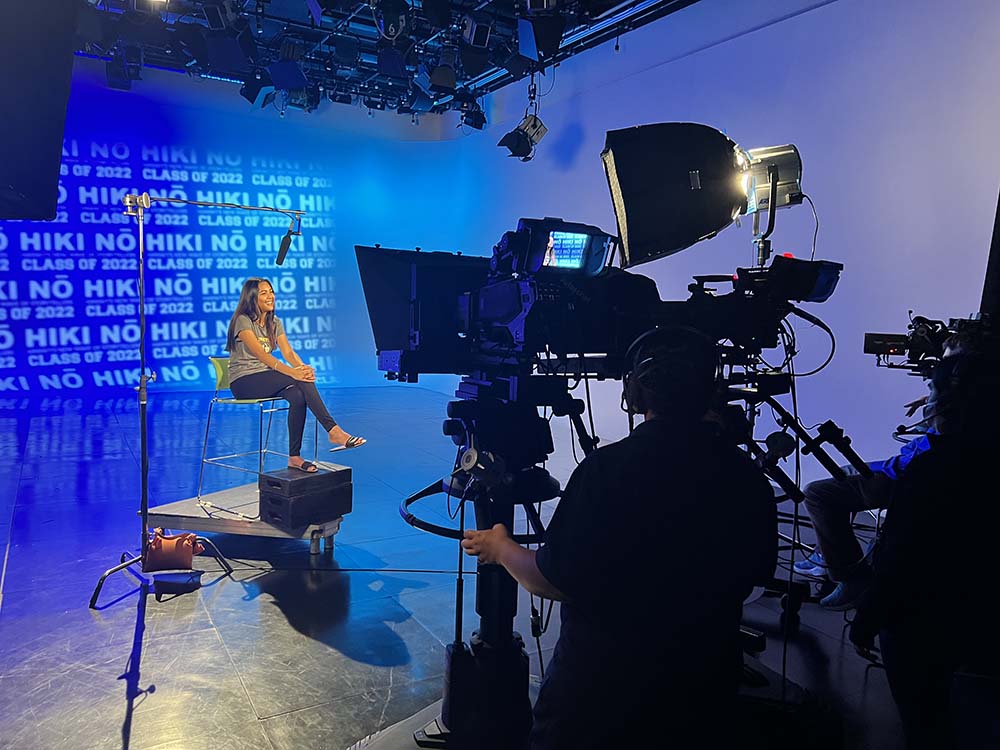 HIKI NŌ means “can do” in Hawaiian. “Hawaiians actually use it in conversation, and it’s a positive affirmation,” said Lori Kaya, grant writer for PBS Hawai‘i. “HIKI NŌ. I can do that.” The digital-media program supported by the Alaska Airlines Foundation pairs students and teachers with professional mentors from Hawai‘i’s media and film industries.

Saige Adaro, 18, felt lost in 2020 when the pandemic brought an abrupt end to 10 years of studying dance – until an invitation to join a video class propelled her onto a new creative path. Holden Aniya, also 18, discovered a love for digital storytelling, which has helped her stay closer to her family while she pursues her dream of becoming an airline pilot. For both young women, an innovative digital media program serving elementary through high school students that is supported by the Alaska Airlines Foundation gave them new tools to express themselves and dream bigger.

Adaro and Aniya were among more than 3,300 students in Hawai‘i who participated last year in HIKI NŌ, a PBS Hawai‘i program that teaches students how to create PBS-quality videos telling the stories of their communities. HIKI NŌ, which received a 2022 grant from the Alaska Airlines Foundation, also cultivates professional skills that help students succeed in college and their future careers.

Students’ projects are released on a weekly PBS Hawai‘i broadcast, as well as the PBS Hawai‘i YouTube channel, and 90 schools across four islands participate. “It’s a huge thing for Hawai‘i kids, who are in sort of a little bubble,” said Aniya, who is now a freshman at Embry-Riddle Aeronautical University. “HIKI NŌ is a great way for kids to get out there, speak to different people and share their stories with everyone.”

Adaro loved her work with HIKI NŌ so much that it changed her entire career path. She’s now majoring in screenwriting at Chapman University in California.

“Like dance, this was telling stories through movement, but I found that I like telling stories through writing and video because it was a way to highlight people in my community,” said Adaro, who produced a half-dozen videos during her junior and senior years at Pearl City High School – including one reflecting on how the pandemic altered her creative journey. “In our projects, I always loved being the one to craft the script, and this helped lead me to where I am.”

Aniya, who has known since she was in eighth grade that she wants to be a commercial airline pilot, says the program also taught her how to handle criticism and overcome obstacles. And now that she’s far from home studying aviation, she loves making videos to share with family. “It’s amazing to think about how that invitation to focus on telling a story can give you something that you can carry on forever,” she said.

The Alaska Airlines Foundation, a nonprofit grant-making organization, is dedicated to supporting programs for the next generation of leaders in aviation and beyond, particularly in the West Coast states we call home. HIKI NŌ is among 68 organizations in Hawai‘i, Alaska, California, Oregon and Washington that received grants from the Foundation in 2022 to equip and enable young people to pursue their career dreams.

Over the past 23 years, we have invested more than $4 million in grants for communities where Alaska Airlines flies. HIKI NŌ received past support from Alaska Airlines, and the 2022 Foundation grant came in the same year we celebrated 15 years of service to the Hawaiian Islands.

“Programs like HIKI NŌ enable equity and opportunity for students who may otherwise be overlooked and put them on a path to achieve future success,” said Diana Birkett Rakow, Foundation chair and senior vice president of public affairs and sustainability at Alaska Airlines. “The Alaska Airlines Foundation helps great organizations like PBS Hawai‘i do this important and powerful work to inspire young people in our communities and equip them with the tools to dream big.”

Adaro began to realize that filmmaking could be a viable career as she produced HIKI NŌ projects like “Sewing a New Normal,” which told the story of her school’s fashion program. “I loved being able to do a video about how that program has survived COVID and how it’s continuing to grow,” she said. “Just shining a light on something that often goes overlooked, that contributes a lot to students’ lives, was really gratifying and I loved doing it.”

Ryan Kawamoto, a director and vice president for Kinetic Productions in Honolulu, remembers getting his start in a high school video production class. Now, he’s mentored dozens of HIKI NŌ students. “Not all of them will go into the industry and that’s OK,” he said. “But they’re learning valuable soft skills like teamwork, communication, creative problem-solving, speaking skills and writing skills. The list goes on and on.”

The Alaska Airlines Foundation is now accepting new grant requests for 2023. More information on applying for a Foundation grant can be found here.