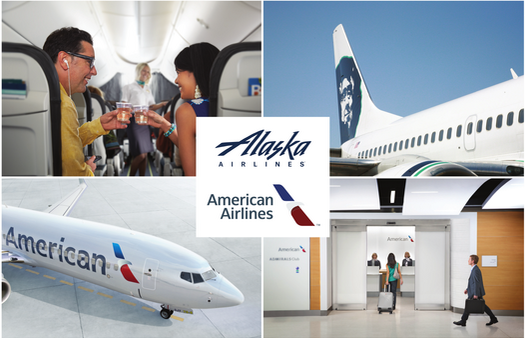 The Alaska Airlines Mileage Plan is expanding its reach with new options to earn and redeem miles on American’s full network, which will include flights that were historically US Airways flights, beginning October 17 – and other enhancements arriving even sooner. These will add value to Alaska’s frequent flyer miles and improve the benefits of MVP elite status.

American Airlines and US Airways merged in 2013 to create the world’s largest airline. Mergers happen in stages, and the pending October 17 migration to a single reservation system will be a significant moment when all US Airways flights become American Airlines flights, making them eligible for the same benefits and opportunities that Mileage Plan members already receive when they fly with American. Customers can book the flights starting today for travel Oct. 17 or later.

New ways to earn and redeem miles with Mileage Plan

Just how significant is this improvement? Alaska has grown in recent years with the addition of several new routes and new destinations. But partners allow it reach even further – and help you earn elite status and miles faster.

Mileage Plan has a unique collection of airline partners because it’s not a member of a traditional alliance. Instead, Alaska negotiated individual relationships with some of the best carriers. American Airlines is one of these partners, and the addition of the former US Airways network makes the existing partnership with American even stronger. This integration will add 61 new American Airlines destinations (14 are destinations not previously served by Alaska or other partners) and an 86 percent increase in eligible American Airlines flights that can help you earn miles and status with Mileage Plan. More flights also mean more available award seats when you want to use your miles.

Alaska’s other partners include Cathay Pacific, British Airways, Air France/KLM, Fiji Airways, and Emirates, among others. In July, Alaska added Hainan Airlines as its newest Mileage Plan partner. While some share the same oneworld Alliance to which American belongs, others do not. Earning miles with Alaska on former US Airways flights will also create new opportunities for those travelers to redeem their miles.

Alaska works to maintain that satisfaction by ensuring you can take your benefits with you when you travel on another airline.

Alaska Airlines and American Airlines have long had an agreement offering reciprocal elite benefits for their best customers. Those benefits will now expand to US Airways flights as they begin to operate with American flight numbers.

Enjoy new places to relax before your trip

Finally, American and Alaska will be making it easier to relax in each other’s airport lounges when you’re on the go. An expanded agreement goes into effect Aug. 15 that will allow Board Room members to visit the entire network of American Airlines Admirals Club lounges in more than  50 locations whenever they fly on Alaska and American. Members of the Admirals Club can already visit one of Alaska’s four Board Room locations in Seattle, Portland, Anchorage or Los Angeles.

American Airlines just announced a major overhaul of its lounge network, beginning in Sao Paulo and Phoenix. The makeover will give clubs a more stylish and consistent look, provide convenient communal tables and powered workstations, and feature local artwork. The food selection will be enhanced with Greek yogurt, soups, and other snacks – though you’ll still have to visit the Board Room for Alaska’s famous pancake machines!

You’ll soon have more ways to earn and redeem miles, as well as more places to enjoy the benefits of your Board Room membership as you fly throughout the network of the new American.