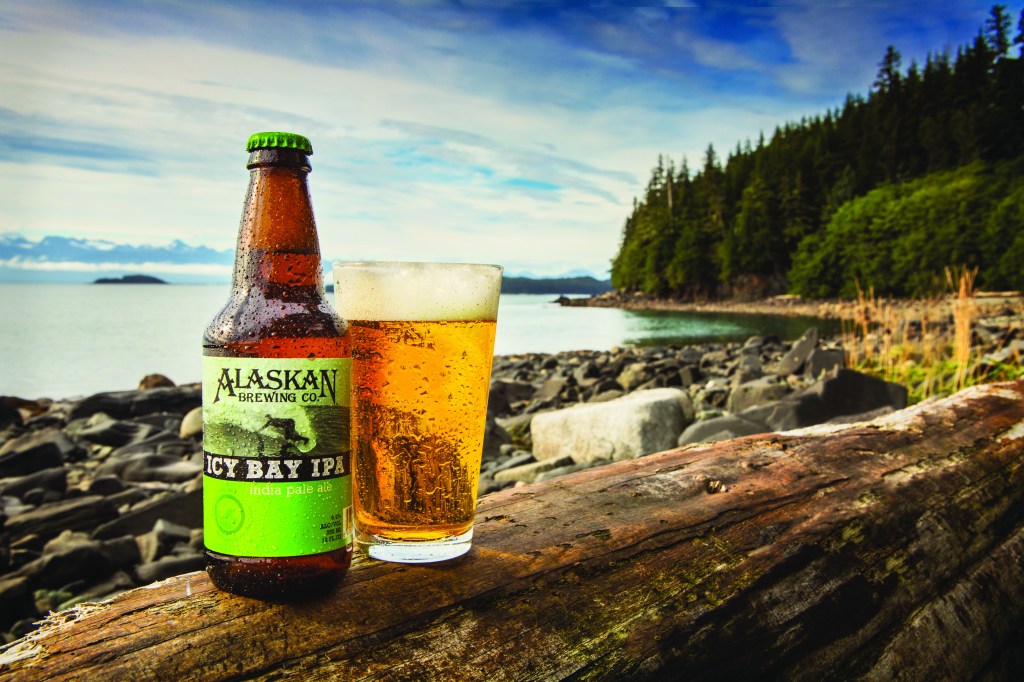 For the month of April, we're offering Alaskan Brewing Company's Icy Bay IPA on all flights for only $5.

Raise your hand if you like beer. If your arm shot up, I’m with you. Like a lot of folks, I really enjoy a nice craft beer: an amber, a pale ale and, increasingly, an IPA. Beyond the hoppy deliciousness, enjoying a microbrew is another example of how great it is to live in this beautiful corner of the world. With Alaska, Idaho, Oregon and Washington rating among the top 10 states in the nation for microbreweries per capita, there’s a strong argument to be made that this is the center of the craft-beer universe.

True story: the first beer I ever enjoyed (after turning 21, of course) was an Alaskan Amber. I was home from college for the summer and when I opened the refrigerator at my parents’ house in Juneau, there was this cool-looking brown bottle with a picture of a fishing boat on it. It could not have been fresher, having been brewed only a couple miles away at what was then a new concept—a microbrewery. The Alaskan Brewing Company was one of the first craft breweries in the country and has been going strong now for nearly 30 years. I’ve been a fan almost as long.

Our team here at Alaska Airlines has been delighted to serve Alaskan Brewing Company’s award-winning beers on our flights for nearly 10 years. Not only do they make world class beer, but we share their roots in Alaska, their entrepreneurial spirit and their focus on environmental sustainability. Alaskan Brewing supports the cleanup and preservation of waterways and coastlines from Alaska to California and the Great Lakes to the Gulf Coast, using a percentage of sales of its Icy Bay IPA to fund grants for environmental projects through the non-profit initiative Coastal CODE (Clean Oceans Depend on Everyone).

This month, we’re partnering with Alaskan on some additional efforts to keep our communities green. We’ll be offering their tasty Icy Bay IPA on all our flights for only $5. In addition, Alaska Airlines will be giving $50,000 to The Nature Conservancy to support its respected efforts to protect and restore the Emerald Edge on the coastlines of Washington and Alaska.

While this is a fun way to promote Earth Month, Alaska takes very seriously its commitment to be the airline leader in environmental stewardship. Our employees are proud of the fact that the International Council on Clean Transportation has named us the most fuel-efficient airline in America for four years in a row. From burning less fuel (resulting in a 30 percent reduction in carbon emissions) to our industry-leading onboard recycling efforts to measures we’re taking to make our buildings more energy efficient, we are committed to doing our part to minimize our environmental footprint.

These efforts include teaming up with others to foster new approaches to caring for the environment. A great example comes out of the University of Washington’s Foster School of Business. The Alaska Airlines Environmental Innovation Challenge takes place April 2, bringing together innovative and entrepreneurial college students from around Washington – 40 teams applied this year to be pared down to 22 finalists. Students create actual prototypes, like new catalytic converters for marine engines, digesters that turn spoiled produce into fertilizer and a technology to recycle cotton clothing into new fabrics. The folks at the UW call it a “science fair on steroids.” These students showcase their passion as well as their innovation as they compete not only for prize money, but to be leaders themselves in making a difference for our environment.

We salute these students, along with our friends at the Alaskan Brewing Company. Perhaps even better than a salute would be a toast—with an Icy Bay IPA, of course!

Thanks for flying with us.

Read more about Alaska Airlines’ efforts toward environmental stewardship in our soon to be release 2015 Corporate Sustainability Report at www.alaskaair.com/sustainability.