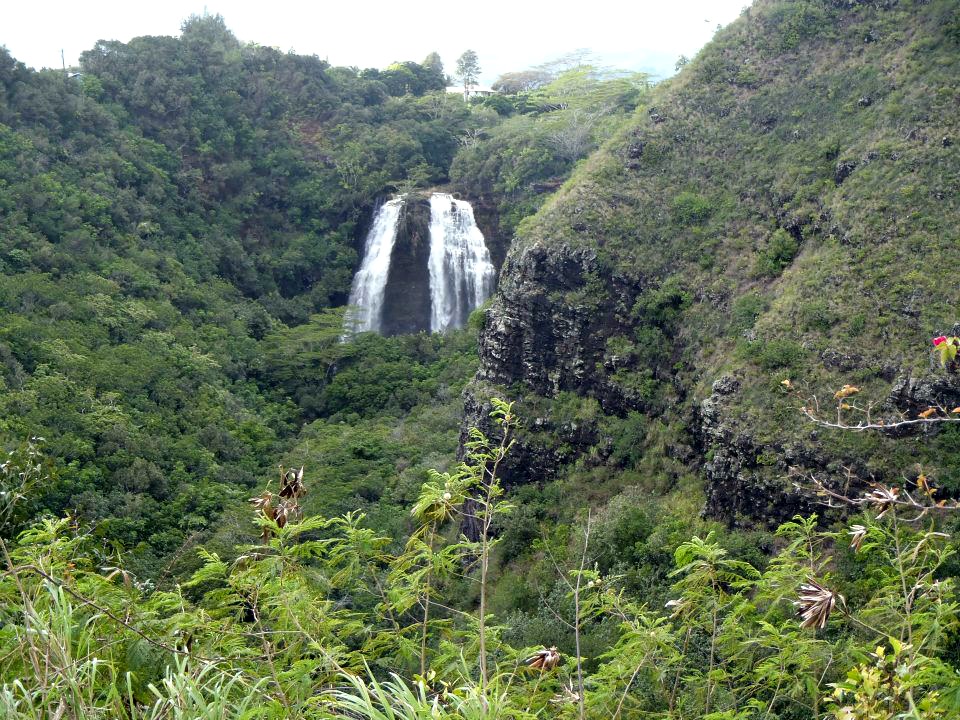 Oh Hawaii, land of warmth and beautiful beaches, of delicious food and welcoming culture. I have a love affair with Hawaii. Working for an airline, I’m able to travel a lot and have been to the islands over 20 times — twice to Kauai in the last six months.

The island of Kauai does have those things in abundance — warmth, beaches, food, and culture. But it’s also known as the Garden Island, and those wanting to get up close and personal with nature may find it their favorite of all the Hawaiian isles.

Also called the “Grand Canyon of the Pacific,” Waimea Canyon was created by the Waimea River, itself formed by runoff from Mount Waialeale, which is one of the wettest places on earth. Waimea is dry and arid with tones of orange, green and sienna. Next door neighbor Kokee State Park is green and lush most of the time. The abundance of flora makes a striking contrast to the red soil common in this southwestern part of the island (Waimea in Hawaiian means red water).

The people of Kauai realize what a natural wonder they have in their midst, and have designated the canyon a state park. Besides the many viewpoints, there are also several trailheads for those who wish to hike around, over, and into the canyon—including an intermediate but relatively family-friendly one that deposits you at the top of the Waipoo Falls, which is visible from several of the viewpoints.

At the end of Canyon Road, the view turns from the canyon and the island’s interior towards the sea, where the Waimea Canyon meets the southern edge of the famed Napali Coast.

Pro tip: there are two ways up to Waimea Canyon. There’s Waimea Canyon Drive from Waimea town and Kokee Road from Kekaha. I recommend taking Canyon Drive (stopping at Ishihara Market in Waimea for some poke) and then down Kokee Road. The views are much better this way! 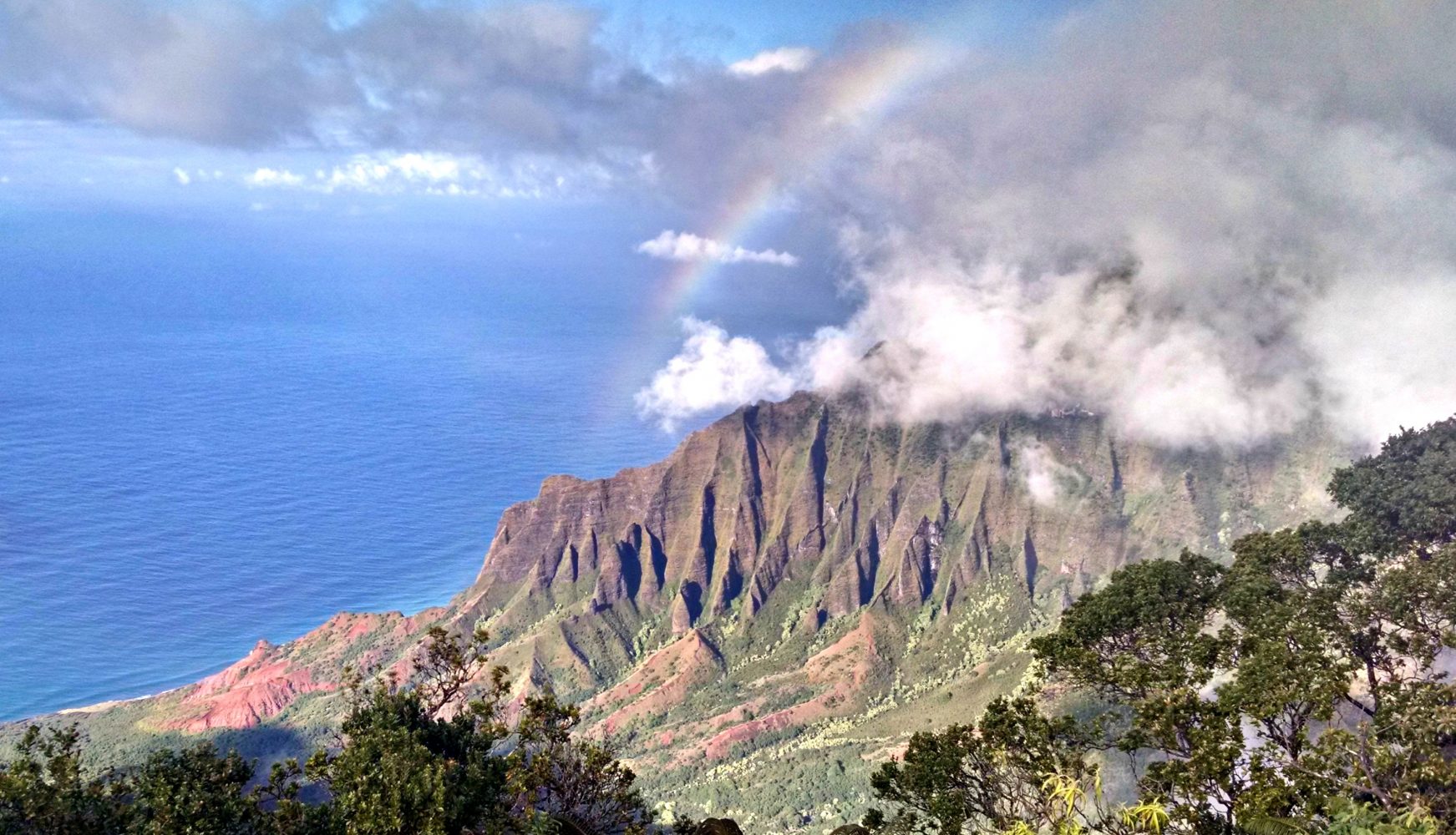 Part of the enchantment of Napali is its relative inaccessibility. You can see it from the air by taking an expensive helicopter tour. You can see it from the sea, by a boat tour, or a strenuous kayak journey only allowed during the summer. And you can see it by land, if you are willing to undertake a difficult 11-mile (one-way) hike along the Kalalau Trail, noted by both Backpacker and Outside magazines as one of the most dangerous hikes in the world.

Whichever way you go to see it, the view is otherworldly. The sheer, jagged cliffs rise and fall from the sea along fifteen miles of coastline. If you’re not able to access it from one of the above options, you can still catch a glimpse from Kee Beach, which is as far north as you can go by car. If that’s not enough, try the first mile or so of the Kalalau Trail. I’m not much of a hiker, but I found it manageable, and the views were amazing even at the quarter and half mile points.

Kauai is lush and green thanks to a healthy amount of rain in the mountains and valleys. This also makes it home to many wonderful waterfalls—some within easy reach, and some requiring just a little more effort.

One of the most famous is Manawaiopuna Falls—better known as the Jurassic Park Falls. Yep, this is the iconic waterfall seen in the movie Jurassic Park. It’s on private land, so the only access is by helicopter. Some outfits will make it a part of an island tour that also covers the Napali Coast.

Another amazing waterfall is Hanakapiai. If you’re not up to the Kalalau Trail but still want a challenging hike with a good reward, aim for these falls. The first two miles follow the Kalalau Trail to Hanakapi’ai Beach, then branch off along the streambed for another two miles to a 300-foot high waterfall. Enjoy a biting cold dip in the pool below to refresh yourself before the return trip. Do not do this hike if it has been raining—the rivers and streams can run high, the ground can get slippery, and it can be dangerous all around.

Easier to reach are Opaekaa Falls and Wailua Falls, both found between Kapaa and Lihue. They’re just as grand without too much effort, just walk out of your car! Parking can be limited, but they’re easy stops between the airport and other parts of the island.

This is what you came to Hawaii for. You’re probably on the east side, near Kapaa and Lihue, wondering where the good beaches are. We did the same thing. As it turns out, all you have to do is head west.

Beginning at Polihale State Park at the south end of the Napali Coast, and snaking down the west side, are 17 miles of golden sand. (Note: It breaks most rental car agreements to drive to Polihale State Park because the road is not paved.) The easiest access is Kekaha Beach Park, its southernmost point. Just pull over from Highway 50 and fall out into the sand.

For families with kids, the west coast might be a bit rough. Try Salt Pond Beach Park in Eleele, Poipu Beach in Poipu (one of the world’s best beaches, according to the Travel Channel), and Lydgate State Park in Lihue. All these beaches have excellent shore break and gentler waves, and Lydgate even has two sheltered pools for kids to play in.

North is for the more daring. Hanalei Bay has two miles of beach, but the waves can be rough—surfers and boogie boarders like it here. If you’re up to a short hike, Secret Beach in Kilauea is a ten minute trail down to a three-part golden sand beach with fairly good swimming. We loved this beach for its serenity and privacy, but fair warning—so do nudists. (Note: Nudity is illegal on any state beach in Hawaii.) 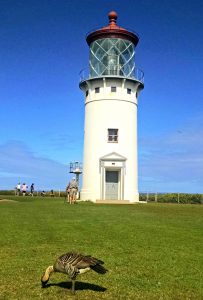 Marking the northernmost point of the Hawaiian Islands, Daniel K. Inouye Kilauea Point Lighthouse and Wildlife Refuge not only affords wonderful views, but a closer look at some local wildlife. Whale watching is awesome here in the winter months. Around the cliffs nest hundreds of ocean birds like the red-footed booby and the Laysan albatross. And everywhere in the refuge are nene (Hawaiian goose), the state bird of Hawaii, only found in these islands.

Kauai is an island full of life. Its beautiful topography sets it apart from the other Hawaiian Islands, and it offers many adventures for those willing to explore a little off the beaten track.

What is your favorite thing to do on Kauai?