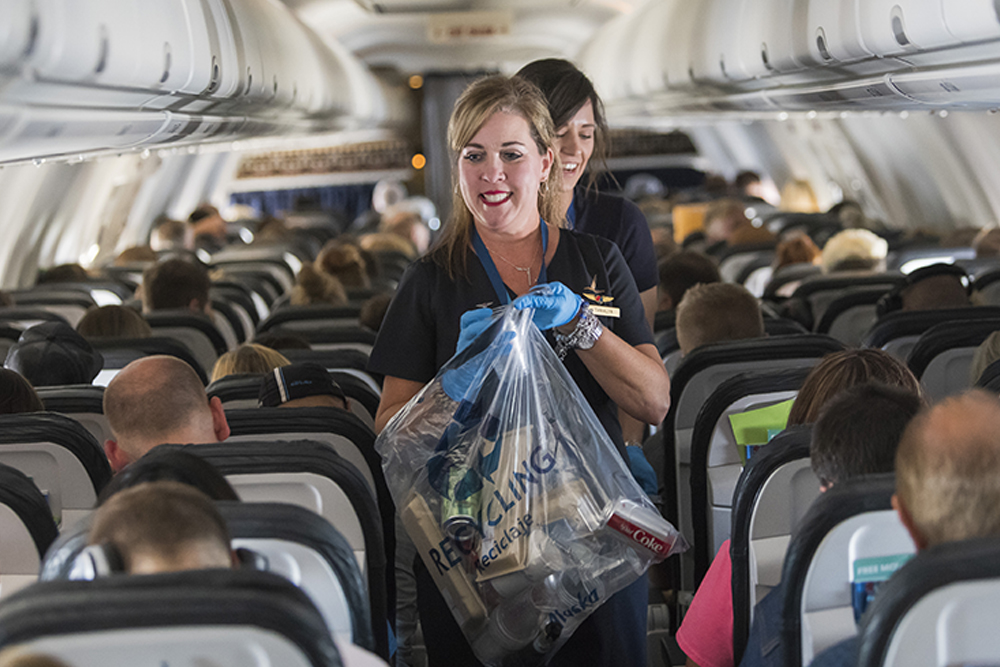 Refillable water bottle? Check. Packed light? Yep. Took public transportation to the airport? Gold star! Globetrotters today think more and more about the impact of their travel, especially air travel, on the environment. But do you know that the smartest thing you can do to lighten your carbon footprint while flying, is something you’ve already done?  Yup, by making the smart choice to fly Alaska Airlines.

At Alaska we make conscious choices every day to reduce the impact of our operations, through big things—like purchasing the most fuel-efficient aircraft and exploring sustainable alternative biofuels. We also think about the little things—like eliminating plastic straws, recycling onboard items and using locally made food and beverage items.

Dune Ives, Alaska Gold 75K and executive director of Lonely Whale Foundation, feels good about the choice she makes to fly Alaska, because of Alaska’s commitment to flying greener.

“If I must be on the road and away from my family, it’s good to be flying on an airline that matches my values,” she said.  “Alaska is noticeably different in this way. I see it in action every time I fly on Alaska. Flight attendants work hard to separate items, and recycle and compost. They live their values. I don’t see this same commitment in action when I fly other airlines.”

So how does Alaska fly greener? Here’s a few ways:

Green places.  Alaska flies to some of the most sustainable places on the plant, like Costa Rica and the Hawaiian Islands. “Just choosing your destination, based on its sustainability, is a great way to fly greener,” said Ives, who travels often for work and with her family and loves Hawaii.

Clear the air. Alaska has the most fuel-efficient and environmentally-friendly fleets among all U.S. airlines and we were a pioneer in the use of RNP, a navigation technology that decreases emissions, improves safety and even gets you to your destination faster. “It makes me feel like I’m doing a little less “bad” when I fly Alaska,” said Ives who also likes to travel with Alaska’s Global Partners.

And the sea. In partnership with Ives and Lonely Whale, Alaska ditched plastic straws onboard flights and switched from plastic to bamboo citrus picks. “Strawless is an important first step in reducing plastic in our marine habitats, and I’m proud to say that Alaska was the first,” Ives said.  Alaska also replaced bottled beer with cans, which are lighter (less fuel) and easier to recycle.

Waste not. In the last eight years, flight attendants have captured 12,000 tons of recyclables that would have otherwise gone to landfills.  Since we started recycling in 2010, we’ve cut our waste per passenger in half.

Ives knows that being green isn’t easy, so she suggests that travelers start simply with just one thing, and do it well. For her, it’s always traveling with her reusable fork, knife and spoon set to eliminate the use of plastic at the airport and in the air.

Here’s some other easy ways you can get your green on.