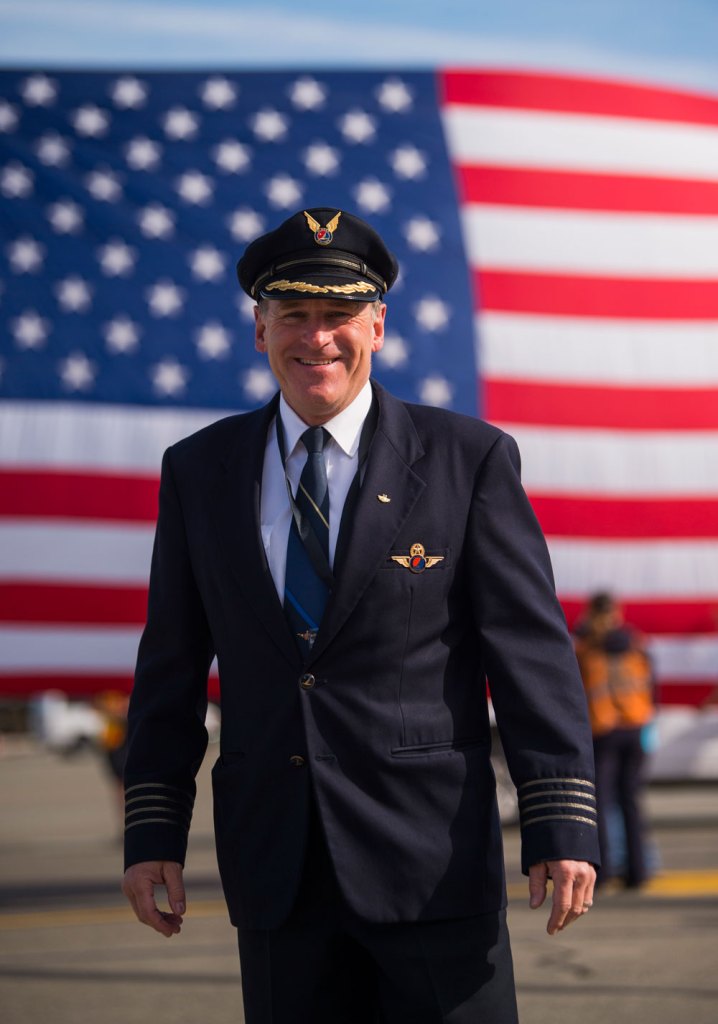 In the early 1980s, a 23-year-old pilot named Mike Baumgartner started calling on Alaska Airlines. He knew he wanted to fly for a living, and he was becoming increasingly more convinced that Alaska Airlines was where he wanted to plant his stake. He grew up in Bellevue, Washington, had gotten his pilot training as a teenager, and had already spent a lot of time in The Great Land, flying fish from Dry Bay, Alaska, to Yakutat in DC-3s.

So, Mike bought a new suit, shaved and walked into the Alaska Airlines corporate office, located near Sea-Tac International Airport. He introduced himself to the nice lady at the front desk (Jan May, a legend in her own right). He didn’t have quite enough experience at the time, but he kept at it. Every time he earned a new rating, he put the suit on again and dropped off another resume. He and Jan came to know each other, and she looked out for him. Finally, the day for an interview came, and she ushered him through the door and, wishing him luck, said, “It’s up to you, kid.”

As Mike recalls, he was really nervous, and essentially failed the interview. Only after the hiring manager stood up to dismiss him did Mike relax and start telling his interviewer who this young pilot really was. They ended up talking for another hour and a half, and Mike got the job. That was February 6, 1984.

Why all this background? On April 30, Mike and 14 other employees were inducted into Alaska’s Hall of Fame, a group we call our “Customer Service Legends.” To be as direct as possible, most of us believe that the only reason Alaska is still here and still prospering today is because of the extraordinary service that our people provide. For so many of our folks, life—and work—is all about connecting with other people and lifting them up. It’s so simple to say, but such a powerful human experience.

I have so many stories I’d like to tell you about Mike. He is a pilot’s pilot. He flies a lot. He loves aviation. He loves you, our customers. And he loves his fellow employees. He’s one of very few people I know who, when he’s getting ready to hang up the phone, will say—“Hey, Brad, you know I love you.” This is how Mike lives his life. He says, “Alaska has been my family for 35 years, and I do love these people.” As I write this, I’m honestly humbled that we have a guy like this working here.

I tell new people I fly with, ‘This is your airline. This is all of ours to take care of.’ ”

Mike has flown a ton over his career, but has also made his voice and his leadership count to help us move our culture forward. He’s facilitated employee workshops; he’s volunteered at Aviation Days and countless other activities; and he’s been an ambassador for our airline with investors in New York City and beyond. His smile says it all.

Alaska is fortunate to have so many people who, just by their sheer strength and determination, have lifted the company to greater and greater heights. With our Legend award, we recognize the best of the best. In addition to Mike, there are great people who work in all divisions of the company and in locations ranging from Anchorage to San Diego. Fewer than one-quarter of 1% of our employees are recognized with this honor. They truly are the best of the best.

I sat down with Mike on the day of our Legends celebration and asked him how he felt as he nears the twilight of his career; he’ll reach the mandatory pilot retirement age of 65 in just three and a half years. He said, “I love this place. Alaska is our airline to take care of. I tell new people I fly with, ‘This is your airline. This is all of ours to take care of.’ ”

Thank you, Mike. You’ve taken good care of us. And thank you to your fellow 2019 Legends for giving this place your all. The sky’s the limit with people like you.

Also, thanks to you, our guests, for flying with us today, and thank you for reading about Mike and our other extraordinary Legends.

This column also appears in the June 2019 issue of Alaska Beyond Magazine.