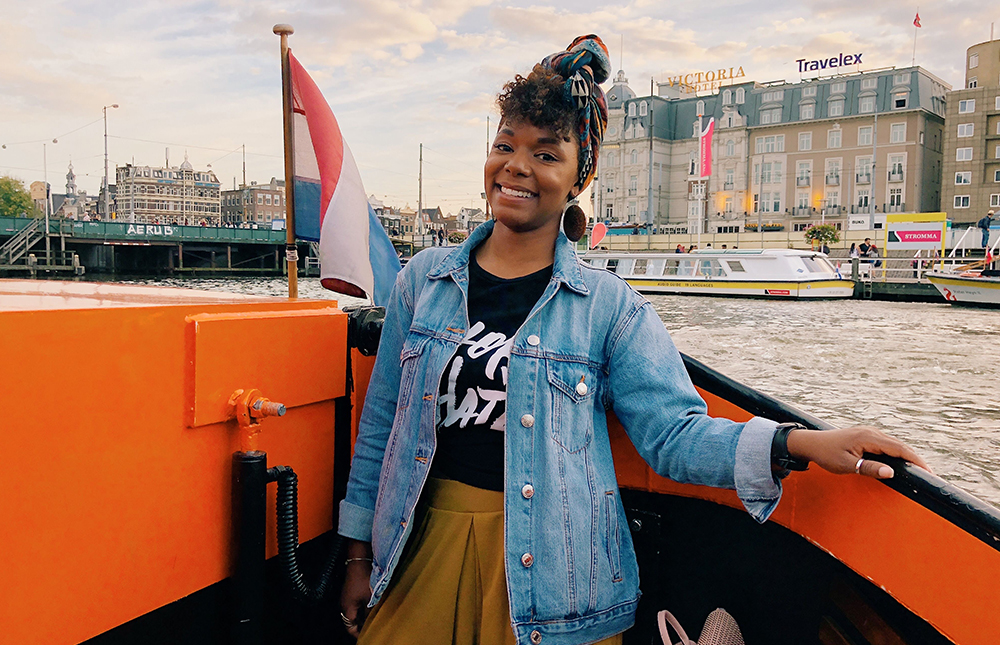 Long before Beyoncé brought Historically Black Colleges and Universities (HBCUs) to center stage at Coachella, experiences alike were cultivated by trailblazers centuries before and continue toward a more equitable future.

HBCUs were created out of necessity at a time when Blacks in America were prohibited from attending higher education institutions that were predominantly white. Today, there are now 107 HBCUs that provide education for students from all socio-economic backgrounds while continuing the legacy and commitment to Black education.

‘HBCUs are the embodiment of legacy, history and Black excellence.’

HBCUs have been a vehicle and driving force in the fight for equality and liberation. From freedom fighters to world-renowned writers, from aeronautical math geniuses to the Vice President of the United States. Some of the world’s most notable legends, leaders and innovators have emerged from these institutions.

‘I am my ancestors’ wildest dreams.’

I am a first-generation college graduate. My HBCU experience was immensely transformative. Not only because I finally had professors who looked like me, but because they taught me what was waiting for me on the other side and prepared me for the road ahead.

“A Past to Cherish. A Future to Fulfill” is the motto of my alma mater, the “Unsinkable,” Albany State University. Those words resonate every time I drive down Georgia Highway 300 — a road that used to be lined with cotton fields and dotted with plantations that once housed enslaved people.

The saying honors our past and people whose blood was shed and lives were lost in those fields. It’s a reminder to be eternally grateful for those who came before us, those who weren’t afforded the right to an education. Even if they, the people who diligently fought for those rights themselves, never saw the fruits of their fervent labor.

‘I wanted to be surrounded by people like me, my culture.’

I didn’t learn about HBCUs through legacy or lineage. In fact, I didn’t have a frame of reference for college at all. I learned about them through the television show A Different World. I didn’t know much, but I knew I wanted to attend a university like Hillman, the fictional HBCU portrayed in the series. As someone who grew up in a small, predominantly white town in Northwest Georgia, I wanted to experience something different.

Vice President, and HBCU graduate Kamala Harris, said it best, “What you learn at an HBCU is you do not have to fit into somebody’s limited perspective on what it means to be young, gifted and Black.”

It was at Albany State University, a school affiliated with UNCF, where teachers like Dr. Bennett, my business communications professor, demanded excellence and nothing less. Mediocracy wasn’t an option because she knew I would have to fight twice as hard to get half as much as other individuals. She was hard on her students because she knew the world would not be easy on us.

Then, there were professors like Mr. Hankerson, my English lit professor who was also my first Black male teacher. The gravity of that alone is astounding.

It wasn’t until my sophomore year of college when I experienced the academic scope through a Black male teacher’s lens — a lens that defied society’s stereotypes of who and what a Black man represents. He was a man of the arts, with a palpable passion for literature. He was my favorite professor by far, simply for his ability to get you so entranced in the literature through his own unique storytelling and spinning the stories in a way that made it relatable to modern-day life. He challenged me to be a better writer and a better storyteller.

Albany State provided me a sense of belonging. It was a place where I could shed the layers of assimilation and the idea of fitting into whatever box I was expected to be in. I realized the viable impact of being taught by teachers who looked like me and the importance of Black role models who paved paths before me who now lead prominent positions.

‘I finally felt I could fully thrive and rid myself from feeling like my blackness was a burden or my existence was a threat to society.’

Representation matters. The defining moments of my HBCU experience were the life lessons that weren’t a part of the syllabus; the history not found in the text books. It was the community and the we’re in this togetherness that forged lifelong friendships and redefined what it meant to be family. This was my HBCU experience. One I wouldn’t trade for the world, and one I encourage all young Black students to consider experiencing for themselves.

The sky is the limit

Beyond the curriculum, Albany State is where I was introduced to the world of international travel through a college program that stationed students on American military bases around the globe as camp counselors.

My first flight was at the age of 21. I flew to Germany, where I lived for three months. It was a life-changing experience that led me to live the travel-loving, location-independent lifestyle I do today. My mission is to empower and inspire other young, Black travelers to do the same.

It is programs like this and Alaska Airlines’ LIFT Miles program, in partnership with UNCF, that affords HBCU students the opportunities to pursue their dreams. I would have never been able to financially afford such an experience had my college program not sponsored me, and I know so many other students can relate. For this, I am forever thankful for the programs that put minority college students in a position to reach new heights.

I especially love Alaska’s UNCF LIFT Miles program because it has consistently showed up for minority students over the past 15 years and counting. Not only does the program support HBCU students with flights home for the holidays, but they fly students to college tours at HBCUs, career development opportunities and other UNCF programs.

With over 7 million miles contributing and donated, Alaska’s flights help students overcome the financial obstacles of getting a college education.