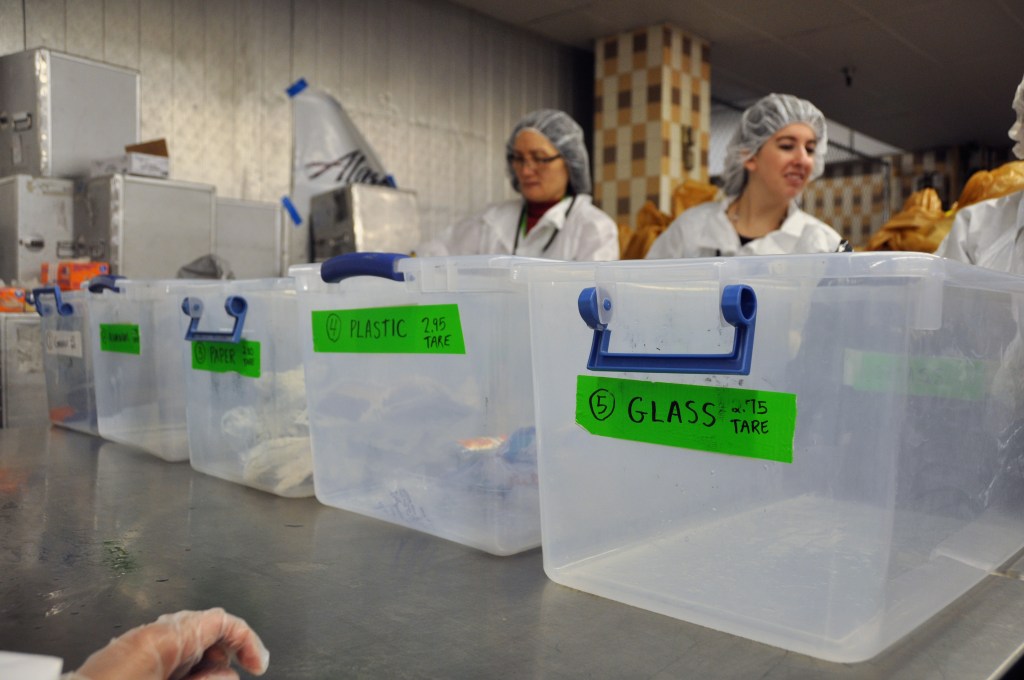 Alaska Airlines volunteers sort 10 planes worth of trash and recycling on a spring morning.

Sorting onboard recycling is not a clean job. It’s slimy, oozy, smelly and, sometimes, horrifyingly splattery. But believe it or not, it’s a coveted volunteer position at Alaska Air Group – so popular that there’s not always room for all of the hopeful volunteers.

About six times each year, onboard food and beverage specialist Kathy Hues sends out an email calling for volunteers. And each time, a handful of employees meet bright and early at the airline’s catering kitchen to sort about 10 flights’ worth of trash and recycling.

“Alaska Airlines is known for its commitment to sustainability, and we’ve set some very aggressive goals for ourselves over the next several years,” says Jacqueline Drumheller, Alaska Airlines sustainability manager. “We audit at least 60 flights every year to make sure we’re really doing what we say we’re doing.”

Clad in hairnets, gloves and aprons, the employees tear open bags of waste from each flight, separating plastic from glass, draining unused liquids and avoiding dirty diapers at all cost. Hues stands by with a clipboard, taking careful notes on how many pounds of plastic or paper were recycled or trashed on a given flight.

The program started through the grassroots of environmentally conscious employees. At sister carrier Horizon Air, enterprising employees had been recycling since the 1980s, driving truckloads of recycling to sorting facilities after each flight.

Then in 2007, several passionate employees formed the company’s “Green Team,” a group dedicated to driving environmental efforts. And flights have been getting greener ever since.

Like any new program, onboard recycling had its fits and starts.

For one, it wasn’t easy designing a program that would work across the board.

Some cities separate glass, others can’t recycle certain cups or bottles. But Drumheller says the success of the program is a testament to the people who pioneered it, working across divisions to find a way to fly greener.

“For the most part, we’ve gotten better and better every year,” adds Hues. “And we can always do more. We’re always looking to see if there’s something we can do to make an item or process more sustainable.”

Flight attendants collected for recycling nearly 2,900 tons of mixed paper, plastic, aluminum and glass waste onboard Alaska and Horizon flights in the last two years, cutting in half the amount of waste per passenger sent to landfills since 2010. By 2020, the airline wants to cut that number even further.

”I’m just really impressed that people are actually trying and they’re interested in being more sustainable,” says Alaska Airlines project coordinator Ashli Austin, who joined her first sort in May. “Recycling onboard is an extra step, so you know people must be passionate about it if they’re even doing it.”

Today, Alaska and Horizon are the only U.S. domestic carriers to recycle mixed recyclables (including glass, paper, plastic and aluminum) on every flight, and other airlines are looking to the inflight Green Team for guidance.

“We’re trying to be leaders,” Hues says. “We want to push it forward and not give up.”

Be a greener flier with these onboard recycling tips: